We are honoring the August 8th,1839, birthday of General Nelson Miles - a man who bullets could not keep down.  An example of his courage and determination came during the December 13, 1862, Battle of Marye's Heights (part of Battle of Fredericksburg). Miles was convinced the Federal tactics were dead wrong. He suggested a bayonet charge to Brigadier General Caldwell who denied permission as, "It seemed to me a wanton loss of brave men."

While waiting Caldwell's answer, Miles received a terrible wound. A bullet caught him in the throat and came out behind his left ear. "His comrades expected him to die at any time," recalled Major General Oliver O. Howard. But Miles remained conscious and full of fight, and took his case for a bayonet charge back to Howard. As the General remembered what transpired, Miles gripped his bleeding throat, "holding together the lacerated pieces of flesh with his hands. He staggered to my headquarters, delivered his message and then fainted dead away. He was determined to either to be killed or promoted." 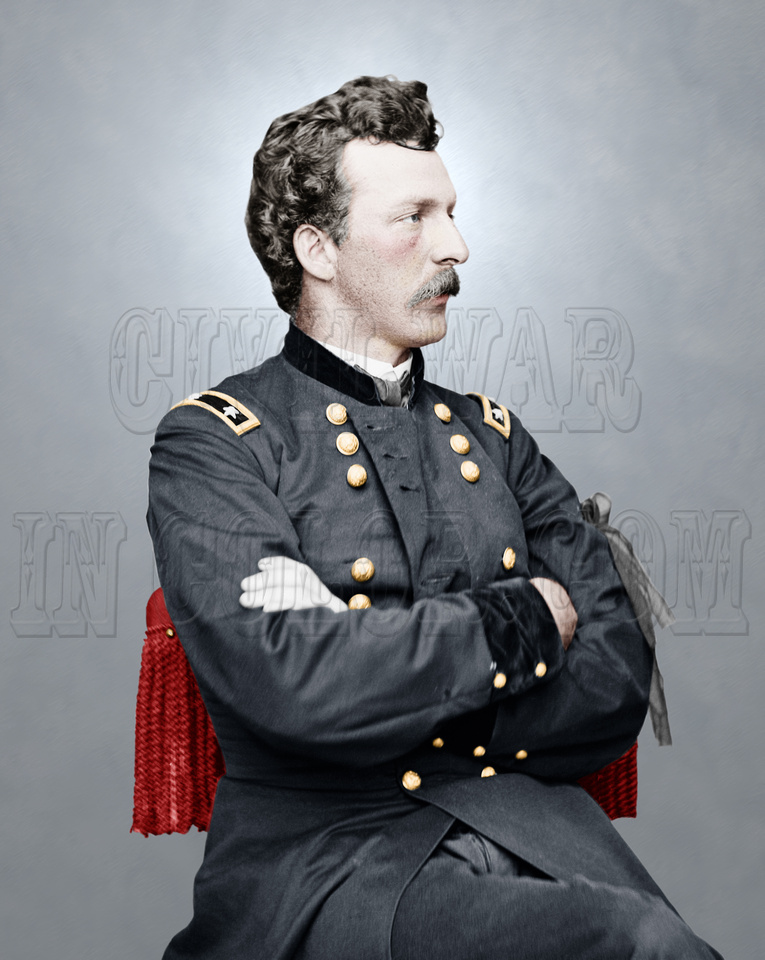 06150 - Maj. Gen. Nelson Miles; Age 26 - Medal of Honor - Chancellorsville 1863 [LC-DIG-cwpb-06150]Major General Nelson Miles was one of the most colorful & famous soldiers of his time. Theodore Roosevelt referred to him as "Brave Peacock". Miles, one of the War's "Boy Generals", became a Major General at the age of 26. He participated in every major battle of the Army of Potomac except Gettysburg.


At the start of the war, Miles was a twenty-two year old store clerk in Boston without any military experience. For most, this would have meant an honorary, meager status in the enlisted ranks. Miles, however, managed to secure a commission and within six months of volunteering in September of 1861, was promoted to Lieutenant Colonel. As a Colonel, he earned the Medal of Honor during the Battle of Chancellorsville for “Distinguished gallantry while holding with his command an advanced position against repeated assaults by a strong force of the enemy; was severely wounded.”


Following Chancellorsville, in 1863, he was promoted to Brigadier General and finally Major General in 1864. At the end of the war, as commander of Fort Monroe, Virginia, he was the target of public criticism in the North for having kept Confederate President Jefferson Davis chained in his cell.


After the war, Miles became a famous Indian fighter. Like most of his contemporaries, his rank was reduced. Many of the Generals had significant reductions (Custer, also a Major General, became a Captain). Miles, who was only a few months older than Custer and without his West Point background, became a Colonel. Following Custer’s death in 1876, it was Miles that finally managed to end most of the Indian Wars. During this time Miles pioneered the use of heliograph (using Morse code mirror flashes), establishing lines over 100 miles long.


By 1880, Miles was once again a Brigadier General, this time as a permanent and not brevet rank given during the Civil War. In 1894, he oversaw the US troops that aided in putting down the Pullman Strike riots.

Ten years later he was promoted again to Major General, 26 years after first receiving the rank. While few of his contemporaries ever attained their Civil War rank following the war, Miles was not done. In 1895, he was named Commanding General of the United States, a title once held by Winfield Scott, George McClellan, Ulysses S. Grant, William T. Sherman and Phillip Sheridan (among others). Promoted to Lieutenant General, Miles once again commanded troops in the field during the Spanish American War.


Upon his retirement in 1903, the office of Commanding General was abolished, making Miles the last to hold the office. During World War I, Miles once again volunteered for duty but was declined due to age. In 1925, at the age of 85, Miles died while attending the circus with his grandchildren. At the time, Miles was one of the last surviving Civil War era Generals. Miles is buried at Arlington National Cemetery.