We are remembering the 150th Anniversary of the Battle of Cedar Creek, Virginia, on October 19, 1864. As future US President, Colonel Rutherford B. Hayes looked to the south, he saw an appalling sight. Out of the fog, driving a disorganized throng of half dressed Union stragglers before it - came a solid gray line of Confederates. These were General Gordon' s men advancing.

It was a strange retreat. The men were not frantic, remembered Captain S.E. Howard of the XIX Corps, "only stolidly, doggedly, determined to go the rear." A few units here and there paused to shoot back, but US General Crook's command had come completely undone. "The broad plain was a scene of rout," one of Crook's staff officers recalled, "wagons, ambulances, artillery, soldiers without commanders, commanders without soldiers, every fellow for himself, moving backwards in sullen discouragement in the faces of the yelling victors". 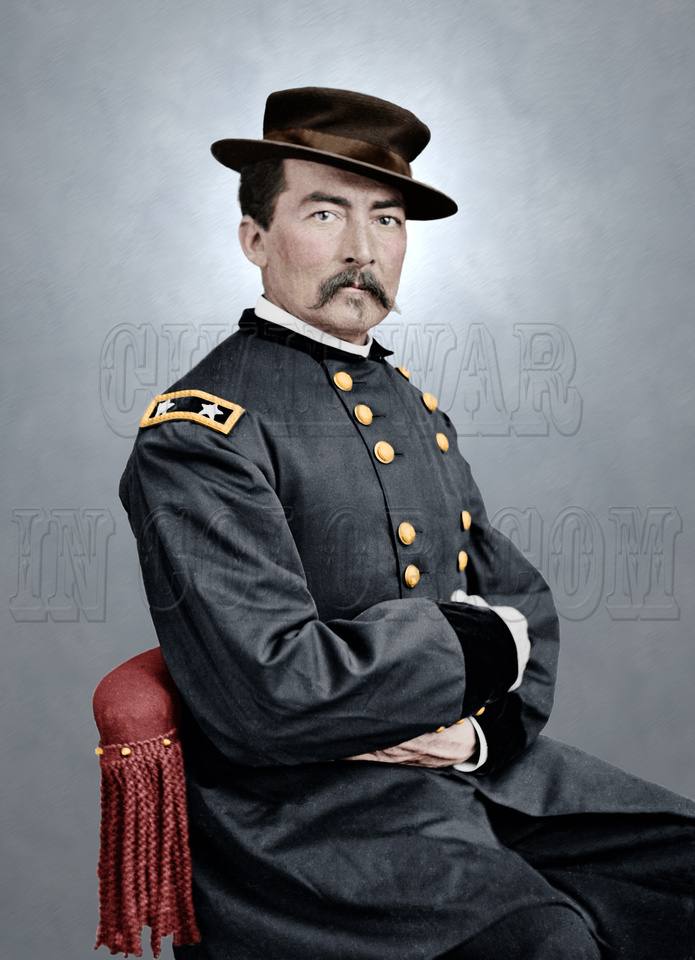 21009 - Major General Philip Sheridan; 'Little Phil' [LC-DIG-cwpbh-01009]On October 19, 1864, General Phillip Sheridan's journey from Winchester to the Battle of Cedar Creek, Virginia is one of the most famous rides in military history and contributed to the re-election of President Lincoln.


Returning to his Cedar Creek headquarters, "Just as we made the crest of the rise above the stream," Sheridan recalled, "there burst upon our view the appalling spectacle of a panic stricken army - hundreds of slightly wounded men, throngs of others unhurt but thoroughly demoralized, and baggage wagons by the score, all pressing to the rear in hopeless confusion."


Sheridan barked out some orders, selected some men to ride with him to the field. Sheridan, on his big black gelding Rienzi, took the road at a rapid clip. As he went, Sheridan waving his cap and pointing to the front yelled, "Come on back, boys! Give 'em hell, God d___ 'em! We'll make coffee out of Cedar Creek tonight! The fleeing men saw him, stopped, cheered, turned around and began to follow him toward the front.


On the field, Sheridan spent two hours organizing the men into a solid line facing the Confederates. Preparations complete, Sheridan rode down the entire two mile front, cap in hand, showing himself to every soldier on the line. "I'll get a twist on these people yet," he yelled. we'll raise them out of their boots before the day is over!"


"Cheers seemed to come from throats of brass, and caps were thrown to the tops of the scattering oaks", recalled Major Walker.


At almost 4:00 p.m. an ominous silence fell over the field. "Even the batteries were still. The suspense was terrible", recalled Col James Kidd. In the awful quiet the rival armies - 45,000 men in all - waited for the inevitable.

Then the order came - "Attention! Shoulder arms! Forward! March! And with martial tread and floating flags the line of battle is away," recalls Major Forsyth. Confederate cannon erupted, Federal guns replied and musketry began to ripple down the lines.


What began as a rout, Sheridan turned into a Union victory, driving the Confederates permanently out of the Shenandoah Valley. Sheridan's dramatic role in the victory, along with the readings of Thomas Buchanan Read's poem, "Sheridan's Ride", gave the North hope that the War could be won. Horace Greeley's influential New York Tribune called it "a magnificent lyric" and ran the seven stanzas of "Sheridan's Ride" on page one. A grateful government rewarded Sheridan with permanent promotion to the rank of major general in the Regular Army.