We are honoring the 150th anniversary of the Battle of Mobile Bay on August 5th & the sinking of the USS Tecumseh. A Confederate soldier remembering the sight wrote, “She careens, her bottom appears! Down, down, down she goes to the bottom of the channel, carrying 150 of her crew, confined within her ribs, to a watery grave.”

Ordered to keep the CSS Tennessee away from the US wooden vessels, ironclad USS Tecumseh steers directly towards her. Ten minutes later the Tecumseh hits a torpedo (mine) and sinks within 30 seconds. Commander Craven and the pilot, John Collins, arrived at the foot of the ladder leading to the main deck simultaneously with water up to their waists. Craven stepped back, saying "After you, pilot", but was unable to follow him to safety before the monitor capsized. Including Craven, 94 of the crew went down with the ship.

Seen here is an image of Admiral David Farragut. During this Battle, Farragut declares, "Damn the torpedoes! Full speed ahead!" The strategy of having 18 ships run a gauntlet of mines may seem rash. However, all but one ship made it through the channel into the Bay. Then again, the crew of the USS Tecumseh, leading the attack may not agree.

Eventually, Fort Gaines and Fort Morgan fell into the hands of the Union Navy. The port was closed to Confederate blockade runners, but the port city of Mobile was never taken. 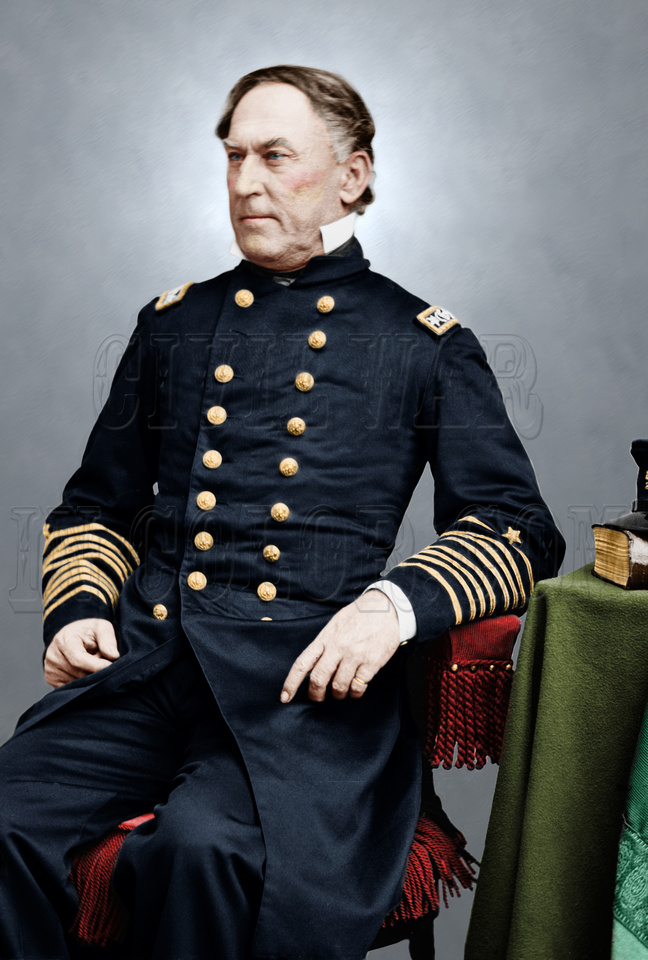 05210 - Rear Adm. David G. Farragut; 'Damn the torpedoes. Full Speed ahead!' [LC-DIG-cwpb-05210]Best remembered today for the phrase, ”Damn the torpedoes! Full speed ahead”, during the Battle of Mobile Bay, it is remarkable that at the time, he had been on active duty for more than 50 years! Serving from 1810 (at the age of 9) until his death in 1870, he was the first Rear Admiral, Vice Admiral and Full Admiral the U.S. Navy ever had.


Prior to the Civil War he had a remarkable career starting as a 9 year-old midshipman on the USS Essex. The Essex had sailed to South America during the War of 1812. There, Farragut captained a captured British ship into Santiago, Chile. By all accounts, he conducted himself with calm courage during his ship's defeat. After this excitement, 45 years of routine naval duty followed.


A Southern by birth, Farragut pledged his allegiance to the Union at the start of the Civil War. Ordered to open the mouth of the Mississippi by taking New Orleans, Farragut earned the title "Old Salamander", running ships under heavy fire between New Orleans' forts.


During the Battle of Mobile Bay, legend has it that Farragut was prepared to go down with his ship if it was sunk. The truth is during the battle, as the smoke from the guns clouded the air, Farragut climbed into the USS Hartford's rigging, and soon was high enough that a fall would certainly incapacitate him and could have killed him. Seeing this, Captain Drayton sent a seaman aloft with a piece of line to secure the admiral. He demurred, saying, "Never mind, I am all right", but the sailor obeyed his captain's orders, tying one end of the line to a forward shroud, then around the admiral and to the after shroud.


Later, when CSS Tennessee made her unsupported attack on the Federal fleet, Farragut climbed into the mizzen rigging. Still concerned for his safety, Captain Drayton had Flag-Lieutenant J. Crittenden Watson tie him to the rigging again. Thus, the admiral had been tied to the rigging twice in the course of the battle, starting the legend.