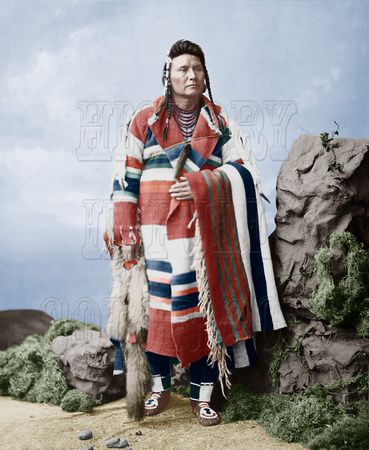 “Our fathers were born here. Here they lived, here they died, here are their graves. We will never leave them.” – Chief Joseph

In the 1870s, the Nez Perce Indians were living on their ancestral lands in the Wallowa Valley, Oregon. As American settlers moved into the area, the Nez Perce were repeatedly asked to move to the Idaho Territory.

After several violent clashes, in 1877, the Nez Perce fled towards Canada for political asylum.

U.S. newspapers covered what would be referred to as the Nez Perce War.

During a 1,170-mile fighting retreat, it was U.S. Gen. Oliver O. Howard vs. the Nez Perce warriors, women and children. The skill and courage of the Nez Perce earned the U.S. public’s admiration. Still, the U.S. Government pursued the fleeing people.

On October 5, just 40 miles from the Canadian border, the Army closed in on the Indians. They didn’t realize that the Army was tracking their movements by telegraph.

Popular history has it that Joseph had said at the formal surrender:

“Tell General Howard I know his heart. What he told me before, I have it in my heart. I am tired of fighting. Our chiefs are killed; Looking Glass is dead, Too-hul-hul-sote is dead. The old men are all dead. It is the young men who say yes or no. He who led on the young men is dead. It is cold, and we have no blankets; the little children are freezing to death. My people, some of them, have run away to the hills, and have no blankets, no food. No one knows where they are—perhaps freezing to death. I want to have time to look for my children, to see how many I can find. Maybe I shall find them among the dead. Hear me, my chiefs! I am tired; my heart is sick and sad. From where the sun now stands, I will fight no more forever.”

Instead of being returned home as per the surrender, the Nez Perce were shuttled from reservation to reservation.

As a spokesman for his people, Chief Joseph would travel to Washington D.C. and New York City. He rode in a parade honoring former president Ulysses Grant with Buffalo Bill Cody. He met with President Theodore Roosevelt. Joseph consistently requested that his people would be allowed to return to the Wallowa Valley.