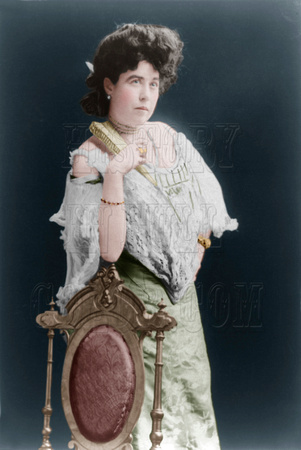 "Suddenly, there was a rift in the water, the sea opened up and the surface foamed like giant arms that spread around the ship." "Unsinkable Molly" Brown describing last moments of Titanic

Margaret "Unsinkable Molly" Brown became internationally famous for her pithy comments, her compassion for others and "can do" spirit after the April 15, 1912, sinking of the RMS Titanic during her maiden voyage.

It took two hours and forty minutes for the ship to plunge under the sea. Having succumbed to their own sales pitch, the White Star Line did not bother to arrange lifeboat drills or life-safer (life vest) instructions to anyone on board. Neither passengers or crew had guidance on what to if the ship sank.

Brown stepped in where she could. She guided her fellow passengers into the lifeboats. She shared her warm clothing with her companions. Insisted that the women share in the rowing and oversaw pulling survivors out of the frozen ocean.

But it was on the rescue ship Carpathia, that her knowledge of foreign languages, experience in organization, good works and fund raising came into play.

"Sprinkled among the affluent," she noted, "were our sisters of second class, and for a time there was that social leveling caused by the close proximity of death."

Brown organized a hospital in the Carpathia's lounge. She complied lists of the survivors to be wired to New York City. She used her linguist skills to comfort the foreign immigrants and saw to it that each had somewhere to go when they land. From the affluent survivors, Brown raised between ten to fifteen thousand dollars for the less fortunate before they docked.

She was just getting started. Pre-Titanic, Brown was part of Denver's high society, a fashion leader, a worker for social reform and famous for her wit.

Once, a friend of Brown's pointed out another woman, noting that it "wasn't proper to wear diamonds in the daytime." Brown drawled, "I didn't think so either until I had some."

After the Titanic disaster, Brown entered the national stage to fight for social reform. She petitioned Congress to revise Maritime Law. She worked for mining reforms, women suffrage and was in demand across the country for her lectures on the Titanic and its link to feminist causes.

Brown felt that breaking up families in disaster was not beneficial in the long run. Her attitude could best be described as, what is the advantage of surviving a disaster if the family breadwinner is gone?

Today, in books, movies and plays, Brown is remembered as a colorful first class passenger. In her day, Margaret Brown was considered a heroine.
© History In Full Color
User Agreement
Cancel
Continue