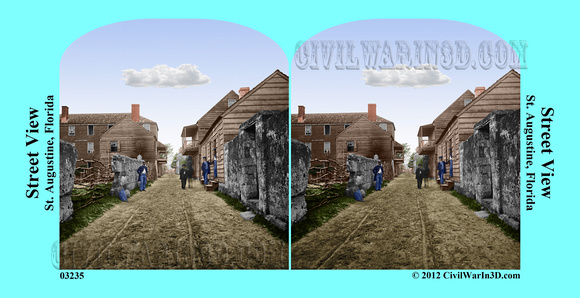 This scene in St. Augustine Florida shows what a typical town during the period may have looked like. Unpaved roads crowded by wooden buildings on both sides. Here we see Union soldiers as well as civilians along the road.

St. Augustine fell into Union hands in March of 1862 and remained there for the rest of the war. About the time of its capture 80-100 men enlisted and joined the Third Florida Regiment. Many of the enlistees were lost in the Battle of Perrysville, KY, in October of 1862. By the Battle of Murfreesboro, TN, fought in January of 1863, only 10 of the original remained.

While the soldiers of St. Augustine did not fair too well, the city remained fairly intact and unchanged. Coming first into Confederate hands in January of 1861 and then back into Union hands in March of 1862 on both occasions the defending forces left without a fight. Union soldiers stationed in St. Augustine enjoyed their time and intermingled with the locals. Many of them moved permanently to the city and stayed for years after.
© History In Full Color
User Agreement
Cancel
Continue