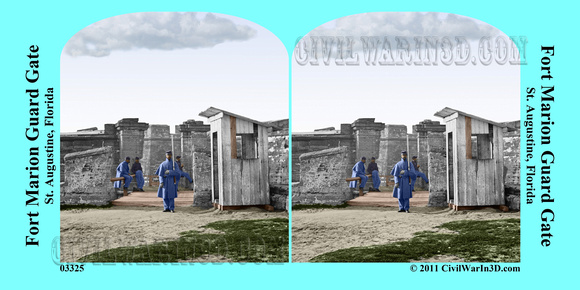 Fort Marion was built by the Spanish in 1672 and was originally named “Castillo de San Marcos”. When the U.S. took possession of Florida in 1821, it was renamed to Fort Marion. At the start of the Civil War, the Union forces garrisoned there were withdrawn, leaving a single soldier to care for the fort.

In January 1861, Confederate troops marched on the fort. The lone soldier refused to surrender unless he was given a receipt for the Fort by the Confederates. Receipt given, the Confederates took possession without firing a shot. Much of the larger artillery had previously been removed and only five cannons remained to defend the Fort.

With the arrival of the Union Navy in March of 1862, the mayor quickly surrendered and the remaining Confederate forces evacuated the Fort. The following morning the Fort was retaken, again, without a single shot being fired. The Fort was used as a prison, first for Confederates and then afterwards to hold Native Americans from the Indian Wars in the west. By 1900, the fort was more than 200 years old and was no longer desired as either a fort or prison.

Designated a national monument in the 1924, it was finally transferred from the War Department to the Park Service in 1942. That year it was given back its original name, “Castillo de San Marcos”.
© History In Full Color
User Agreement
Cancel
Continue