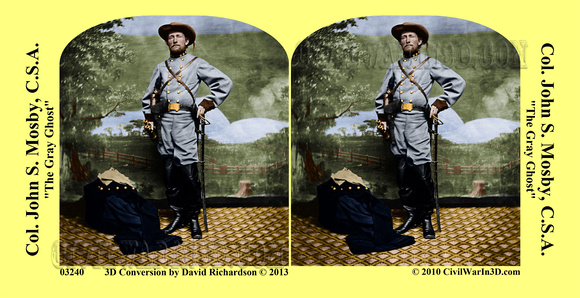 John Singleton Mosby, better known as the Gray Ghost, is remembered best for the tactics that he brought to the Civil War. Using small bands of rangers, he led his men on raiding parties that terrorized the North. In 1863, he managed to capture General Stoughton while he was asleep. Upon being slapped on the rear, Stoughton asked, Do you know who I am?. Mosby replied Do you know Mosby, General? Yes! Have you got the rascal? No, but he has got you! Tactics like this led Grant to order to hang any of Mosbys men without trial.


Following the war, Mosby, an attorney by trade, decided the best way to help the South, was to support the Union. Becoming not only a Republican in the deeply Democratic South, but Grants campaign manager in Virginia, caused many problems. The hero that had once defended the South, now was forced to leave.

After moving to California he was befriended by other Confederates and their families. He would spend long hours recanting his adventures for his new friends and their children. One small boy was so enthused that he would ride out on the ranch and pretend to be Robert E. Lee, while Mosby rode with him as himself. Mosby would spend hours tutoring in the art of quick lightning strikes, how to effectively use a small group of men against a large Army and other more modern tactics not usually associated with the Civil War.

By 1909 that boy had graduated from West Point and began a career that would last the rest of his life. It turns out that Old Blood and Guts was trained by The Gray Ghost. General Patton had learned from the original ranger tactics that are still in use today. Colonel Mosby died in 1916, just two years before Patton would achieve the same rank.