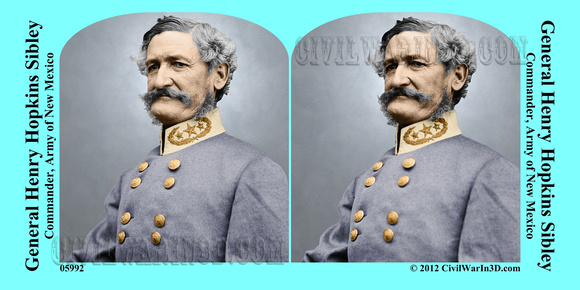 During the Civil War, the “Western Theater” of battle typically referred to the area near the Mississippi river. Even though the Confederacy did extend to Texas, all of the major battles were fought along the Mississippi and to the East. There was a few exceptions. Most significantly, the battles fought by General Sibley in New Mexico.

Henry Hopkins Sibley was born in Louisiana. He lost his father when he was eleven years old and moved to Missouri to live with an Uncle. Entering West Point at the age of 17, he graduated in 1838 to begin a military career. Like many of his contemporaries, he served during the Mexican American war. During the 1850’s he made two significant contributions to the Army. The Sibley stove and the Sibley tent. Both of these were cone shaped. The tent looked somewhat like a large Indian Teepee and could hold between 12-20 men. This design was in popular use by the Union army during the Civil War and also in use by the English army. The stove, also similar in shape to a Teepee, continued in use by the U.S. Army until close to the start of World War II.


At the start of the Civil War Sibley was on active duty in New Mexico and quickly resigned to join the Confederacy. By late 1861, most of Arizona and New Mexico territories were in Southern hands. Sibley’s plan was to move north and capture the gold fields in Colorado to help the Confederate treasury. From there, a move to California would allow the South to have sea ports to bring supplies in from the far west. If successful, the South would have a continuous stretch from the East coast to Southern California on the West.


The first attempt came in February of 1862, when 2,600 Confederates managed to defeat 3,000 Union forces at Valverde. The next battle was in March, at Glorieta Pass. This time the Confederates had 1,100 men opposing 1,300 and again drove off the Union forces. The victory was short lived. They had lost most of their supply train and the mules and horses to support them. This situation forced the confederates to retreat back to Texas. Sibley was given minor commands and in 1863 court-martialed for cowardice and censured.


Following the war he accepted the rank of General in the Egyptian army to serve as an adviser. He died in poverty at the age of 70 in Fredericksburg, VA.
© History In Full Color
User Agreement
Cancel
Continue