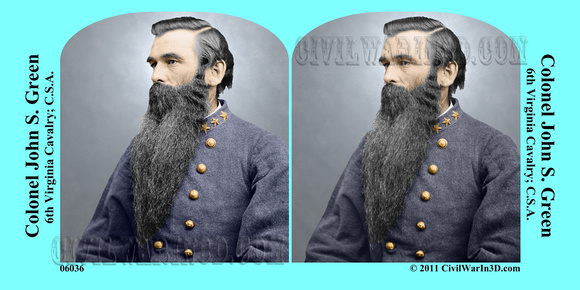 John "Shac" Shackleford Green was born on June 9, 1817, in Rappahannock County, Virginia and became a farmer. In response to the April 14, 1861, surrender at Fort Sumter, President Lincoln raised the call for 75,000 volunteers to put down the southern rebellion. In turn, Green enlisted in the Confederacy on April 22, 1861. After the formation of the 6th Virginia Calvary, he became a Captain in Company B.


Green was promoted to Major, April 30, 1862 and to Lt. Colonel on July 16, 1862. He served as a commanding officer in the field with Thomas Flournoy, a former United States Congressman and unsuccessful candidate for Virginia Governor.


Green became a Prisoner of War and was paroled on September 22, 1862. He was acquitted by court-martial of disobedience of orders and breach of arrest on September 17, 1863. Green resigned on April 23, 1864 for the good of the service. On this General Jeb Stuart wrote that Green "deserves credit for his patriotism. The service will be benefitted beyond a doubt by its acceptance." His resignation was recorded as of May 19, 1864.


The 6th Virginia Cavalry, in which Green served, has an interesting and colorful history. Formed a few months after the battle of First Bull Run (First Manassas) they participated in many major battles as part of the Army of Northern Virginia for the rest of the war. The year after they were formed they fought in Second Bull Run (Second Manassas), Antietam, Fredericksburg, Chancellorsville and Gettysburg, among others.


The Sixth Virginia Calvary, joining Jubal Early, played a part in many of the operations in the Shenandoah Valley and Appomattox. When Lee surrendered on April 9th, 1865 only three men of the 6th Cavalry surrendered. The rest broke through the Union lines to continue the Southern struggle. Soon they too realized that it was a lost cause and disbanded without surrendering.
© History In Full Color
User Agreement
Cancel
Continue