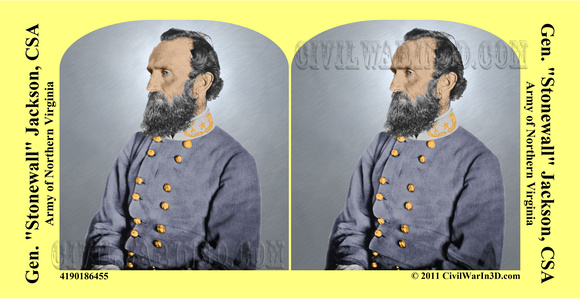 It is difficult to believe that “Stonewall” Jackson only participated in just over half of the Civil War before he was killed. His fame has been so touted that you would think that he had taken part in the whole war. If he had, the war may have turned out differently.

Thomas Jackson was born in 1824 and grew up in what is now West Virginia. When he was two years old, typhoid fever swept through the area killing his father and sister. His mother gave birth to a brother the day after his father died. Afterwards, she moved the family to a one room house to save money. For the next four years, she took in sewing and taught school to support her three remaining children.

Remarried in 1830, she died the following year of complications with childbirth. After being passed around to various family members, he ended up at his uncle’s house. Jackson lived there until accepted to West Point, at the age of 18.


With little formal education, his first years at the Academy where difficult. He was at the bottom of his class academically and struggled to move up. With the determination to succeed, he was able to gradually advance in his class ranking. Jackson graduated 17th of 59 in 1846. His classmates said that if he had another year he would have been first.


Upon graduation he was sent immediately to participate in the Mexican-American war. Over the next few years he was promoted to the rank of Major (brevet) and met both Winfield Scott and Robert E. Lee. At the end of the war he was recognized for having been promoted more often than any other officer during the conflict. He stayed in the army until 1851, when he took a position as a professor at Virginia Military Institute, teaching experimental philosophy and Artillery.


At the start of the Civil War, the Virginia Governor ordered Jackson to take command of several regiments that would later be known as the “Stonewall Brigade”. By June, he had been promoted to Brigadier General and a month later entered the battle that would give him his moniker. The First Battle of Bull Run (First Manassas) started poorly for the Confederates. With the Union army overwhelming the Confederate positions, General Bee searched for anything to inspire his men. In the distance he saw Jackson with his well-disciplined men. Seeing them he shouted, "There is Jackson standing like a stone wall! Let us determine to die here, and we will conquer. Rally behind the Virginians!” This helped to turn the tide. But alas, General Bee was killed within minutes of uttering these words. He never knew how his declaration would affect the battle or Jackson.

Promoted to Major General, Jackson would be known from then on as “Stonewall”. Were others gingerly approached the early battles, Jackson took advantage and boldly attacked larger forces and won. When combined with Robert E. Lee’s strategy, the two became a nearly unstoppable duo. Participating in numerous battles, including First and Second Bull Run (First and Second Manassas), Antietam, Fredericksburg and Chancellorsville, Jackson repeatedly proved his ability to out maneuver his opponent on the field.


Returning to camp at the end of the day's fighting, his staff was mistaken for Union cavalry and fired upon. Jackson was shot three times but survived. Several of his staff and many of the horses lay dead on the field. Quickly evacuated from the front lines, it was several hours before he received any medical attention. When he did finally get treatment, his left arm was beyond saving and was amputated.

Thought to be on his way to recovery, Jackson remained off the field, convalescing. However, he soon contracted pneumonia. Eight days later Dr. McGuire wrote this about Jackson’s final hours:


A few moments before he died he cried out in his delirium, "Order A.P. Hill to prepare for action! Pass the infantry to the front rapidly! Tell Major Hawks"—then stopped, leaving the sentence unfinished. Presently a smile of ineffable sweetness spread itself over his pale face and he said quietly, and with an expression, as if of relief, "Let us cross over the river, and rest under the shade of the trees."