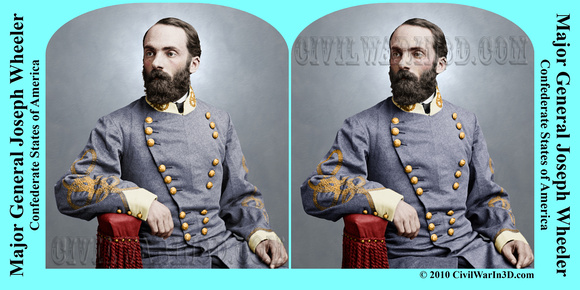 Like many of his contemporaries Joseph Wheeler received his training at West Point graduating in 1859 at the age of 23. Prior to the war he served in what is now New Mexico and received the nick name “Fightn’ Joe” during a skirmish with a local Indian tribe, he was promoted brevet 2nd Lieutenant to 2nd Lieutenant for his actions.

He joined the Confederacy on March 16h 1861 as a 1st Lieutenant under Braxton Bragg (Namesake of Fort Bragg). By September he was promoted to Colonel and to Brigadier General just over a year later and by January 1863 to Major General. Wounded three times and having had sixteen horses shot from under him he received a reputation for leading men into battle.

Following the war, like his fellow Confederate Generals he returned to civilian life and became a planter and lawyer in Alabama. He was elected to congress in 1882 and served until 1900. During this time he was known to reach out to his Northern counterparts to try to heal the old feelings that remained.

In 1898, while still serving in Congress, he volunteered for the Spanish-American war and was given a commission as a Major General by President McKinley (who had also as a Major in the Union Army during the Civil War). He left for Cuba to become division commander for the group that included Teddy Roosevelt’s Rough Riders. At one point during battle he is reported to have said “Let's go, boys! We've got the damn Yankees on the run again”.

Following the Cuba campaign he was sent to the Philippines serving under Arthur McArthur (father of Douglas McArthur). While there he reportedly heard an infantryman complain about the heat and having to march. Dismounting the sixty three year old General took the man’s pack and rifle, told the soldier to mount his horse and completed the rest of the march.

In 1900 he retired from the Army and resigned from Congress and moved to New York. After a long illness he died in 1906 and is one of very few former confederate officers buried in Arlington and is the only Confederate general to return as a general in the U.S. Army.
© History In Full Color
User Agreement
Cancel
Continue