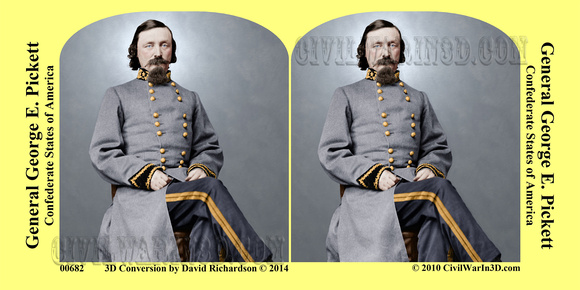 General George Pickett had a colorful career prior to the Civil war. Born in Richmond Virginia he moved to Springfield Illinois when he was 17 to study law. Through his interest in law, he met Abraham Lincoln who assisted (through his law partner, John Stuart, then a U.S. Congressman) with Pickett being nominated for West Point. Graduating last in his class of 1846, left Pickett in an ominous position that would usually relegate officers to obscure posts and a lackluster career. Fortune was shining on George that year. The need for new officers immediately thrust him into battle during the Mexican American War which had started in April of that year. In September of 1847 he retrieved the flag from another future confederate general, James Longstreet, who had been wounded and became the first to reach the top of the parapet. He received national recognition and a promotion to Captain for his action. Following the war he was assigned to Fort Bellingham, near present day Bellingham, Washington. While there in 1859, he occupied San Juan Island along with 68 men. In what became known as the “Pig War” he prevented the landing of 1,000 British troops. This territorial dispute between the U.S. and Great Britain again thrust him into the limelight.


With the outbreak of the Civil War in 1861 he resigned from the U.S. Army to volunteer in the Confederate Army for his home state of Virginia. He was immediately appointed a Major and within a month was promoted to Colonel. In January of 1862 he became a Brigadier General and by October was a Major General. Nine months later in July of 1863 his division arrived in Gettysburg to assist General Lee. The battle plan for July 3rd called for a two hour barrage to soften the Union lines and then three divisions (one being Pickett’s) to race across a mile of open ground to take the Union position. What followed was disaster for the Confederacy and for Pickett. Half of his 12,000 men and all 13 of the regimental commanders were killed or wounded in the attempt. With the remaining troops limping back to the Confederate lines Lee ordered Pickett to rally his division to help defend the Confederate position. Pickett replied “General Lee, I have no division.” With that his career, and the hopes of the Confederacy, declined. Being the only commander in the charge not to be wounded or killed, Pickett was viewed as less heroic in public opinion of the day. His final battle was in defense of Richmond at the beginning of April 1865. This loss forced Lee to retreat to Appomattox. Pickett followed with his troops and surrendered on April 9th.


Following the war he moved to Norfolk, Virginia and became an insurance agent. It was not until more than nine years after the war that he received a full pardon and amnesty for his participation in the war. He died the following year in 1875 at the age of 50 and is buried in Richmond.