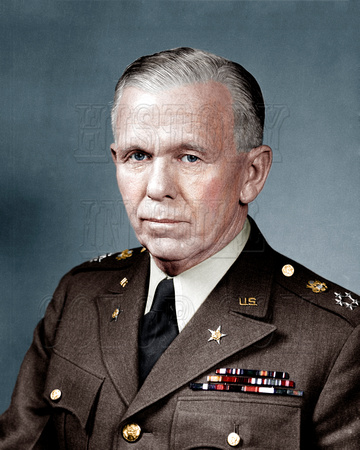 General of the Army George Marshall - I10121

“I couldn’t sleep nights, George, if you were out of Washington.” – U.S. President Franklin D. Roosevelt

On December 16, 1944, Gen. George Marshall would receive his fifth star. Although he is one of the most decorated and respected military leaders in American history, he never commanded troops in battle.

As Chief of Staff from 1939, he oversaw the expansion of the military. Marshall knew that success in World War II required harmonious civil-military, interservice, and interallied relationships.

Winston Churchill described Marshall as “the true ‘organizer of victory.’” As such, Marshall’s opportunity to assume command during the cross-Channel assault was denied by FDR’s need for him in Washington.

After the War, Marshall was appalled by the destruction and despair he saw in Europe. He knew something needed to be done. During the 1947 graduation ceremonies at Harvard, Marshall announced the need for a “European recovery program.” The program would become known as the “Marshall Plan.”


While he was in Europe, Marshall traveled around and was appalled by what he saw- wrecked homes and buildings, people on the verge of starvation, recession, black markets, begging in the streets, and black despair. He began to realize that if something were not done t alleviate the situation Europe might fall into the abyss. By this time, following the death of Franklin Roosevelt, politically, the honeymoon was over for Harry S. Truman. Marshall knew that, in the present air of austerity, Congress was unlikely to make any large appropriation in the president's name to assist the situation in Europe. So on June 5, 1947, at the graduation ceremonies at Harvard where he was receiving an honorary degree, Marshall surprised the world by announcing the need for a European recovery program led by the United States. It was broad, expansive, and expensive. All European nations were invited to participate, including the Soviet Union and its new satellites, though Marshall added, "Any government that maneuvers to block the recovery of other countries cannot expect help from us." The Europeans that applied for help, he said, must come up with their own plan, and America would support the program "as far as it may be practical for us to do so." European reporters had been alerted to the speech and it caused a great stir in the press. One of Truman's advisors suggested to his boss it ought to be named the Truman Plan, but the president was politically savvy enough to know that would be difficult if not impossible to get past the Republicans in Congress. "Call it the Marshall Plan," Truman said.
© History In Full Color
User Agreement
Cancel
Continue