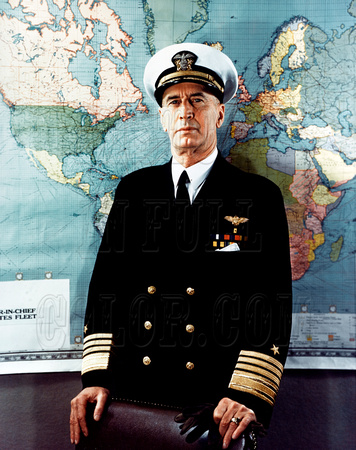 "… he is the most even-tempered person in the United States Navy. He is always in a rage." – Adm. Ernest J. King’s daughter

King is the only person to serve as both the Commander in Chief, United States Fleet (COMINCH) and Chief of Naval Operations (CNO) at the same time.

King’s fifty-five years of service included experience on surface ships, submarines and, as commander of an aircraft carrier, learning to fly planes.

Some considered King an organizational genius.

After the Pearl Harbor attack, King had to spread his ships over two separate Wars even though most of the major ships were out of commissioned for a year.

King asserted, “We must do all that we can with what we have.”

On November 23, 1942, King wrote President Franklin D. Roosevelt pointing out that he had reached the mandatory retirement age of 64 years. Although he would describe King as a man “who shaves with a blow torch,” FDR respected his abilities. FDR replied, “so what old top?” King carried on.
© History In Full Color
User Agreement
Cancel
Continue