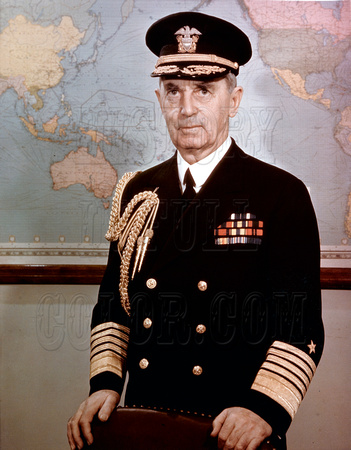 “Bill, if we have a war, you’re going to be right back here helping me run it.” – U.S. Pres. Franklin D. Roosevelt

On December 15, 1944, Adm. William D. Leahy would become the first officer in World War II to receive his fifth Star.

Leahy had come out of retirement on July 6, 1942, to serve as the head of the Joint Chiefs of Staff. Photographs of WWII would record him hoovering a few feet behind Roosevelt, not as one of the most powerful men of the time.

Friends before the War, Roosevelt was able to relax with Leahy and discuss decisions big and small.

In his role as the “Chief of Staff to the Commander in Chief”, Leahy would meet with Roosevelt each morning to determine the strategic decisions of World War II.

In 1943, Leahy was with Roosevelt at the meeting of the “Big Three”, Roosevelt, Churchill and Stalin in Tehran.

As a ploy on D-Day, Leahy was featured in a photo op in an Iowa corn field and would give a commencement speech at a small college:
“Everybody may have peace if they are willing to pay any price for it,” Leahy said. “Part of this any price is slavery, dishonor of your women, destruction of your homes, denial of your God. I have seen all of these abominations in other parts of the world paid as the price of not resisting invasion, and I have no thought that the inhabitants of this state of my birth have any desire for peace at that price…”
Only Leahy knew that within 24 hours, Americans would be fighting and dying on French soil.
© History In Full Color
User Agreement
Cancel
Continue