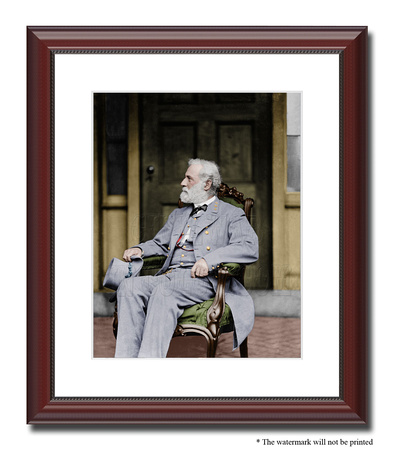 On April 16th, Easter Sunday, the day after Lincoln died, Brady convinced Lee, his son and Lee’s aide, Walter Taylor, to don their uniforms one more time and take a series of six pictures on the back porch of Lee’s home. Seven days before Lee had been in command of one of the largest armies in the world. Four days before was the fourth anniversary of the start of the war. Two days before Lincoln had decided to attend the theatre, rather than the flag raising at Fort Sumter. The day before Lincoln had died. Now Brady was asking Lee to put on his uniform and pose for history.


As Lee sat for this photo, he gazed to his right. What was he thinking? Was it about what had transpired the week before at Appomattox Court House? Or was it about the assassination of Lincoln two days before and his death the day after? What convinced him to put on his uniform and pose as a Confederate General for the camera one last time? Of course there are no answers. He had lost his country, his home of Arlington and the war for which he gave so much. Perhaps he was thinking about the future.
© History In Full Color
User Agreement
Cancel
Continue