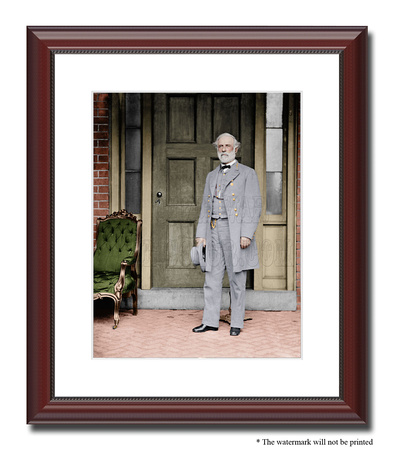 "Men, we have fought through the war together. I have done the best I could for you. My heart is too full to say more." Gen Lee to his troops immediately after signing the surrender at Appomattox Courthouse, VA After the surrender, on April 9th, 1865, Lee went to Richmond to join his wife. Lee was fortunate to have a home that was still standing.

On the evening of April 2nd, 1865, during the fall of Richmond, many of the buildings caught on fire. As the Union troops entered the city, they put out the blaze. One union officer responded to the appeal of a frantic young woman who said her bedridden mother could not flee the approaching flames. Entering the house, he found the invalid to be the wife of Robert E. Lee. Mary Ann Curtis Lee had been disabled by rheumatoid arthritis and by 1861 was using a wheelchair. The officer posted guards at the house and made an ambulance available to evacuate Mrs. Lee if necessary. Mathew Brady had followed General Lee to Richmond. On April 16th, he convinced Lee to don the uniform he was wearing at the surrender and pose on the back porch of the home.
© History In Full Color
User Agreement
Cancel
Continue