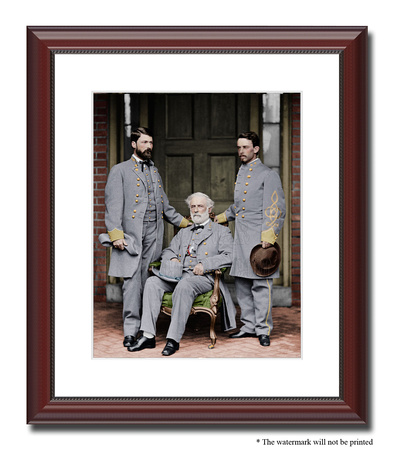 The two people closest to Robert E. Lee during the Civil War were his son Custis (left) and his aide Walter Taylor (right). Custis was named “George Washington Custis Lee” to honor his mother’s side of the family and her relationship to Martha (Custis) Washington. He followed in his father’s footsteps and entered West Point at the age of 17.


In June of 1863, Custis was promoted to Brigadier General. While he longed for field command, he was discouraged by Jefferson Davis, but encouraged by his father. His father did give him the opportunity to command troops during Gettysburg. He was promoted to Major General while commanding troops during the defenses of Richmond in 1864. He was again commanding troops shortly before the end of the war and was captured three days before his father surrendered.


Taylor was given permission to marry just prior to the end of the war. He was married in Richmond just after midnight on the morning it fell to Federal troops. Evacuating with his wife to Southern lines, he stayed there until after Lee’s surrender. He returned to Richmond, a week after the surrender, on the day this picture was taken.
© History In Full Color
User Agreement
Cancel
Continue