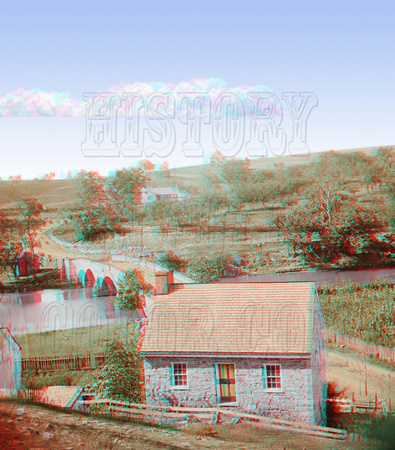 
Today what is known as Burnside’s bridge was built in 1836 to allow farmers to take produce to market. Originally known as lower bridge and was one of three (the others being Upper and Middle bridges) that crossed Antietam Creek. At the time of the war it was often referred to as Rohrbach's Bridge, for the farmer that lived near it.


It took several tries over the course of a few hours for Burnside’s men to capture the bridge. The Union troops suffered more than 500 casualties compared to less than 160 Confederates. The Confederates were so well fortified that they were only driven off by running out of ammunition. Once the bridge was captured it presented its own set of problems. At only 12 feet wide it was a bottleneck for thousands of troops trying to cross and greatly slowed the army.


Burnside was greatly criticized for not using one of the other bridges, or crossing the creek at one of its many low points. The delay allowed Lee to reinforce his right flank. The bridge, for its part in the battle, was purchased by the federal government along with the homes in the area. Today only the bridge remains, the roads and houses that accompanied the bridge are gone.
© History In Full Color
User Agreement
Cancel
Continue