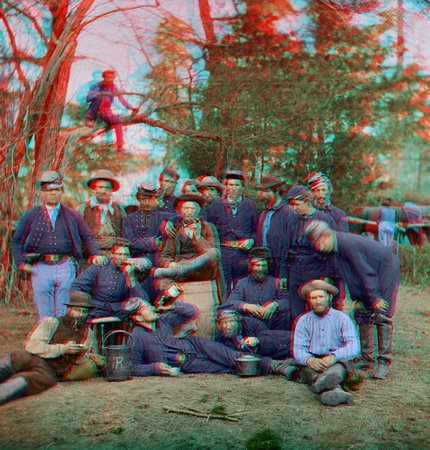 
Meals during the Civil War consisted of a monotonous list of ingredients on a regular basis. Since refrigeration was not available, all meat had to either be fresh or salted. Salted beef and pork were common and could be carried by a soldier without spoiling. Fresh beef was available by slaughtering cattle that had been purchased locally or traveled with the army. A typical day's meal might consist of some salted meat and beans washed down by coffee and perhaps a little sugar to sweeten it.


All of the ingredients were typically provided to the soldiers raw and it was up to them to cook and prepare their own meals. Officers had servants to provide meals and even ate from wooden tables and chairs. The enlisted soldiers would either cook their own meals or form small groups and share cooking responsibility.


If a battle or march was expected, the men would cook all of the food early in the day and then place it in their “haversack” which was a small bag much like a small back pack. This would often become greasy and foul smelling and the inner liner had to be washed or replaced. During the heat of summer these bags could be filthy.


Fruit and vegetables, being perishable, were a luxury and not often found in the diet. Soldiers often pillaged local orchards when passing through an area. Little was known about what was needed as far as vitamins and minerals to sustain a person (much less a fighting soldier). Poor nutrition along with poor sanitary conditions caused health issues for both sides. More men died from disease than from wounds in battle.
© History In Full Color
User Agreement
Cancel
Continue