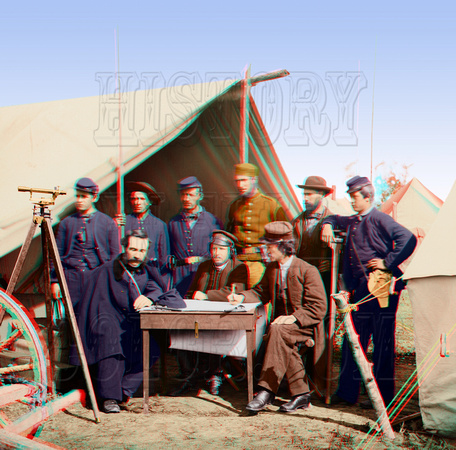 
The origin of the Topographical Engineers dates back to the War of 1812, when they were part of the Army Corps of Engineers. From 1838, the Corps of Topographical Engineers existed independently as an Army Unit for 25 years until 1863. Their primary responsibility was to conduct surveys and create maps for use during war. Working in conjunction with the Army Corps of Engineers, they helped draw up plans for much of the engineering work that was done on fortifications and civil engineering projects.


The men in this image demonstrate some of the tools of the trade. To the far left can be seen a surveyor’s scope and to the far right is steel tape (use to provide precise measurement of distance). Featured in the image William Paine (seated far left), who invented steel tape as well as (most likely) Allan Pinkerton (standing second from right). There also appears to be a foreign observer (third from right).
© History In Full Color
User Agreement
Cancel
Continue