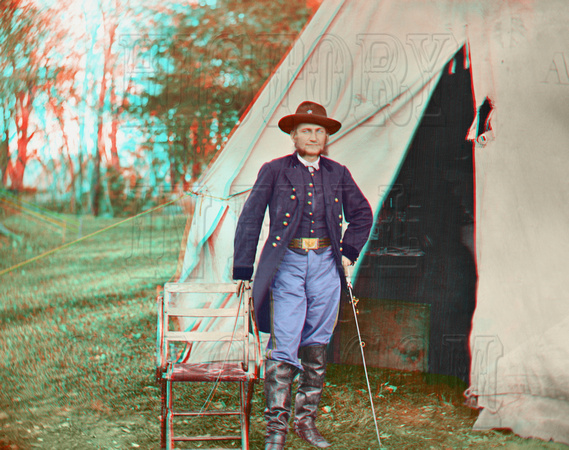 
Hugh Judson Kilpatrick was born in 1836. He graduated from West Point in 1861 as a Second Lieutenant, three days later he was a Captain. On June 10th, he became the first U.S. officer to be wounded when he was hit in the thigh by canister fire during the battle of Big Bethel. He was promoted again, this time to Lieutenant Colonel on September 25th 1861.


As a cavalry commander he gained the infamous nickname of “Kill Cavalry” due to his reckless use of his troops. During the 2nd Battle of Bull Run (2nd Manassas) he lost an entire squadron of troops during a reckless evening cavalry charge. He was jailed on charges of corruption and selling Confederate goods for personal gain. Later he was jailed for accepting bribes during a drunken spree in Washington.


Surviving those episodes, he took his cavalry in pursuit of Lee in February of 1863. He gained a degree of fame by managing to outflank Lee and get within a few miles of Richmond. During Gettysburg, General Pleasanton ordered a cavalry charge near Little Round Top. General Farnsworth protested the order saying it was futile. But Kilpatrick dared him and said, "Then, by God, if you are afraid to go I will lead the charge myself." Farnsworth then complied and was shot five times in the chest.


During his most infamous engagement, he was sent to rescue Union prisoners held near Richmond. When opposition proved too strong, he took his troops down the Virginia peninsula to join General Butler. Colonel Dahlgren (son of Admiral Dahlgren), who was also involved in the raid, got trapped across the river. He returned to the rendezvous location but found that Kilpatrick had left. While attempting to rejoin the main Union forces, Dahlgren and more than 300 cavalrymen were killed and another thousand captured.


Promoted to Major General at the end of the war, President Johnson appointed him Minister to Chile. He was recalled by President Grant in 1870 and ran unsuccessfully for governor of New Jersey. Appointed again as Minister to Chile in 1881, he died at the age of 45 shortly after his arrival. Both Gloria Vanderbilt and Anderson Cooper (of CNN) are descended from him.
© History In Full Color
User Agreement
Cancel
Continue