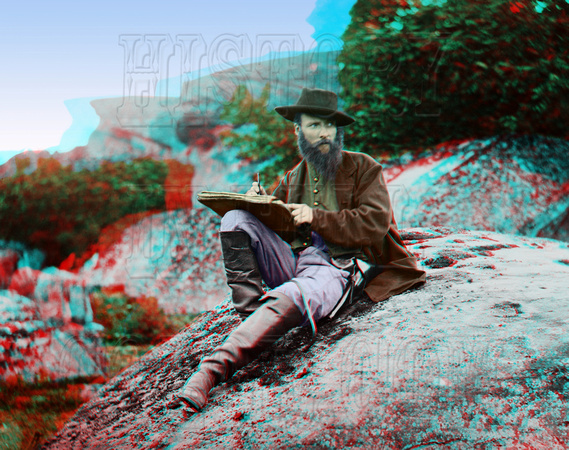 
It may seem odd today but artist’s drawings were still highly important records during the Civil War. While photography had existed since the late 1830’s, it was not possible to print the images directly in a newspaper or magazine. Each photograph had to be in contact with the negative in order to make the print. This over use of the negatives resulted in much of the damage that we see today on these images. To get an image in the newspaper, the photograph would be engraved on a wooden block before it was transferred to a steel plate for printing.


At the time, other limitations of photography included the subject had to stay still for 5-10 seconds and it had to be taken during bright sunlight. Night photography and action shots were not possible. Newspapers and magazines craved images that the photographers just could not provide. To this end illustrators were hired to follow the army and record images that could not be photographed.


Alfred Waud was 22 when he arrived in the U.S. in 1850. Born in England, he dreamed of painting dramatic naval scenes. As he was studying in England, he found work painting backdrops for theatrical productions. While this was far from his dream, it was steady employment and brought him to America. Once in the states, he found work as an illustrator for Boston periodicals and for a few guide books of the day.


The year prior to the start of the war, he was given the full time position of “special artist” for the New York Illustrated News. When the war broke out, he was assigned to follow the Army of the Potomac. The following year he was employed by Harper’s Weekly (an illustrated magazine) and remained with the magazine for the rest of the war. From Bull Run (First Manassas) through the Siege of Petersburg, until the very last days at the end of the war, Waud could be found recording battle scenes with his sketch book.


During the battle of Gettysburg, he was one of only two artists to capture the action and the only one to record Pickett’s charge. When Lee surrendered at Appomattox, Waud sketched him departing the McLean house. A week later, he recorded his final Civil War scene when he sketched the Lincoln Box at Ford’s Theatre. Following the war, he remained with Harper’s producing much of his postwar work during reconstruction. Towards the end of his life, he was once again following in the footsteps of the war. At the age of 62, he travelled back to the battlefields to record new images. While sketching in Georgia, he suffered a fatal heart attack and is buried in Marietta, just north of Atlanta.
© History In Full Color
User Agreement
Cancel
Continue