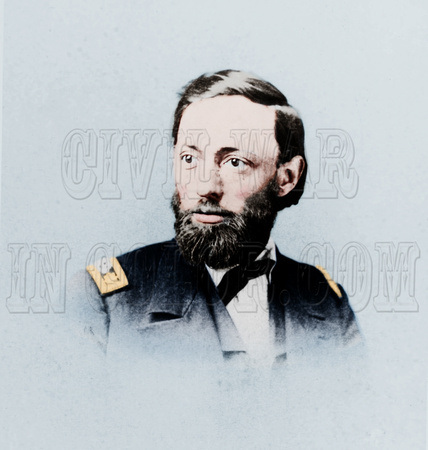 “An extravagant use of boats” – Lt. Commander LeRoy Fitch

In July 1863, Fitch deployed his fleet of swallow-draft gunboats to keep pace with C.S. Gen. John Morgan’s men and clear the river of any boats he could use to cross the Ohio River during his during his Indiana and Ohio Raid.

“… My line at this time being necessarily about 40 miles long to guard all the fords in Morgan’s reach.”

On July 19, the Battle of Buffington, the largest battle in Ohio, began about 5:30 a.m. with U.S. Gen. Henry Judah, 5th Ind. Cavalry engaging the Confederates.

Fitch had positioned his flag boat, USS Moose, at the waterway separating Buffington Island from the Ohio shoreline. At 6:15 a.m., Moose fired its two 24-pdr. guns at Morgan’s howitzers. From the rear, Gen. Edward Hobson’s men, led by Col. August Kautz had finally caught up with Morgan. The Allegheny Belle joined the fight.

The Federals were firing from three sides. The Confederates broke. The Federals would capture the bulk of Morgan’s men.

On July 26, unable to cross the river due to Fitch’s efforts, Morgan surrendered with his remaining men at the Battle of Salineville, Ohio.
© History In Full Color
User Agreement
Cancel
Continue