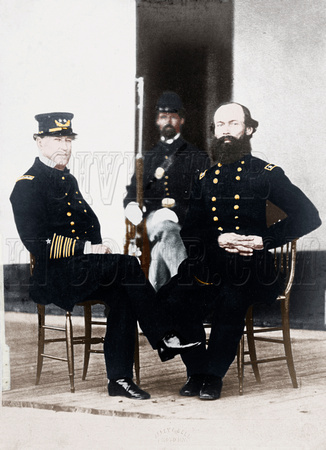 By August of 1864, the Federal blockade had managed to shutter all but two major Confederate ports, Wilmington, N.C. and Mobile Bay, Ala. To close Mobile Bay, U.S. Adm. David Farragut and U.S. Gen Gordon Granger headed a joint land sea campaign. The Army was tasked with capturing the land fortifications protecting Mobile Bay as the naval battle was fought.

Today, West Point graduate U.S. Gen. Gordon Granger is best known for coming to the aid of U.S. Gen. George “Rock of Chickamauga” Thomas during the Battle of Chickamauga, Ga. and freeing the slaves of Texas on June 19, 1865, resulting in the holiday known as “Juneteenth”. Granger was candid and “for the mere tinsel of rank he had no respect”. He was a stickler for following military procedure but earned the ire of U.S. Gen. Ulysses Grant by refusing to move without basic supplies for his men. Granger used political pull to return to the field.

Farragut was already famous as the commander the Union blockade of the Southern ports and for having helped capture New Orleans, La. While U.S. Ulysses Grant was stalled outside of Petersburg, Va. and U.S. Gen. Tecumseh Sherman was outside of Atlanta, Ga., the closure of Confederate shipping into Mobile Bay raised the morale of the North. This image was taken inside of one of the captured fortifications, Fort Gaines, Dauphin Island, Ala., during the campaign.
© History In Full Color
User Agreement
Cancel
Continue