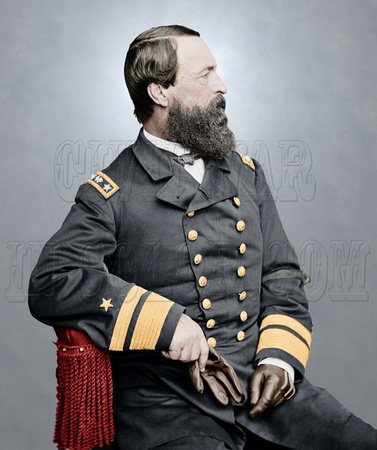 Admiral David Porter was a controversial figure in his own time. Secretary of War Stanton thought Porter was a "gasbag". Journalist Sylvanous Cadwallader called him "by all odds the greatest humbug of the war."


Porter's policy of confiscating cotton during the Red River Campaign had Southerners referring to him as "the thief of the Mississippi." The outcry was such that Porter had to assure his mother that his cabin was not, as she had heard, full of stolen silver.


Grant on the other hand liked him. Porter was open to creative solutions. As part of the Yazoo Expedition, Porter discovered a different water path to Vicksburg. As a result of the incessant rains, the river and surrounding forest were flooded. By floating over the roads connecting different waterways, the Federals could bypass confederate defenses north of Vicksburg.


Grant approved. Sherman and 10,000 troops were ordered to join the adventure. For the first ten miles the boats steamed ahead in a straight line. As they began to encounter old growth trees, Porter's ironclads would nudge them over. An old canal was found to be the exact width of the Federal gunboats. Then the "path" began to twist. Porter recalled that at one time he could look into the woods and see five boats, each following bow to stern, but all pointing in different directions as they conformed to the winding path of the stream.


To add to the exploit, the area was full of wildlife pushed into the forest by the rising water. Rats, mice, snakes, raccoons, cockroaches, and lizards were constantly falling on the decks and were swept off by sailors with brooms.


It is difficult, even in the middle of a forest underwater, to keep the news of boats traveling in the woods from spreading. As the Federal gunboats were stopped by a thick tangle of willows, confederate gunboats were waiting in the bayou on the other side. Porter sent a message to Sherman:


"Hurry up for Heaven's sake. I never know how helpless an ironclad could be steaming around through the woods without an army to back her."


Sherman's troops came to the rescue. The waterway for miles was too narrow for the boats to turn around. As the boats backed out of the maze, the watching federal troops laughed at the sight.


A captured federal soldier, when asked to comment on another of Grant's failed bayou expeditions replied, "Yes, but he has thirty-seven more plans in his pocket". Porter 's willingness to explore possibilities, gave Grant more plans to tuck into his pocket.
© History In Full Color
User Agreement
Cancel
Continue