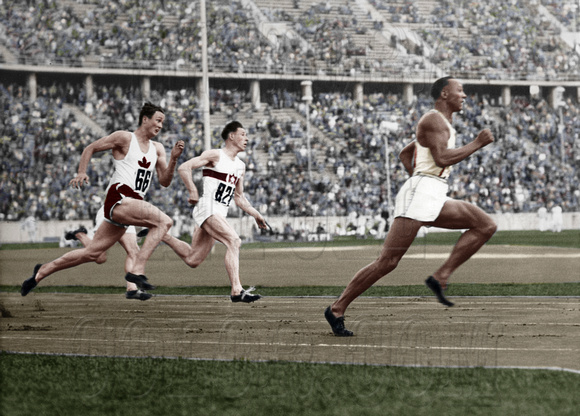 The secret behind my success was "I let my feet spend as little time on the ground as possible. From the air, fast down, and from the ground, fast up." Jesse Owens

In 1936 Adolf Hitler had an agenda. Germany would throw the most impressive Olympics ever, showcasing the superiority of the Aryan race. One of the greatest Olympians ever, Jesse Owns, would throw a wrench in Hitler's plan.

Owens was already famous when he arrived at the Olympics. On May 25, 1935, at the Big Ten Championships in Ann Arbor, Michigan, Jesse Owens had set three world records and tied a fourth within 45 minutes. He came to the Olympics ready to win. According to Owens:

"If you don't try to win you might as well hold the Olympics in somebody's back yard. The thrill of competing carries with it the thrill of a gold medal. One wants to win to prove himself the best."

In what became a record in Olympic Track & Field history, Owens won four gold medals, in the 100m, 200m, 4x100m relay and the long jump. He managed to break or equal nine Olympic records and also set three world records.

In this photo Owens leads the race during heat 3 of the 200m quarter final. From the left we see Lee Orr of Canada and Karl Neckermann of Germany sprinting after Owens.
© History In Full Color
User Agreement
Cancel
Continue