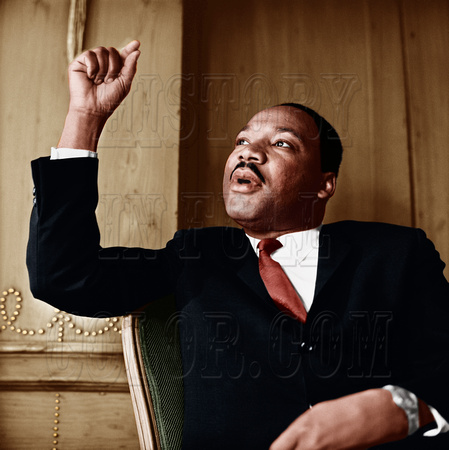 “However deeply American Negroes are caught in the struggle to be at last at home in our homeland of the United States, we cannot ignore the larger world house in which we are also dwellers.” - Martin Luther King Jr., Nobel Prize acceptance speech

During the Cold War in September of 1964, Martin Luther King Jr. was invited to speak in Berlin, Germany at a memorial service for John F. Kennedy and to 20,000 people at the Waldbühne amphitheater. The impact of his one-and-a-half-day visit is still remembered today.

The invitation came from West Berlin Mayor Willy Brandt and Provost Heinrich Grüber who had previously had contact with King during separate visits to the U.S. Both men had perceived the struggle of overcoming racism similar to the struggle of resisting fascism.

Three years earlier, the Berlin Wall had been erected. Against the U.S. government’s wishes, King also traveled to East Berlin. By word of mouth, his offer of giving an ecumenical service at St. Mary’s Church spread, resulting in 1,000 people squeezing into the ancient church. To accommodate the overflow turned away, King repeated the speech at a different church. At East Berlin’s Humboldt University, black students had the opportunity to speak with King.

The East German clergy had been resisting the GDR government’s policies. The pastor of St. Mary’s Church had recently been imprisoned for speaking out against the government and smuggling people across the border. King’s message “that nonviolence is not sterile passivity, but a powerful moral force which makes for social transformation,” was considered a ray of hope to the beleaguered clergy. He spent the evening with East German pastors before returning to West Berlin by midnight.

“Here on either side of the Wall are God’s children and no man-made barrier can obliterate that fact,” said King to the masses on both sides of the wall. In East Berlin, his words of “freedom” and “civil disobedience” resonated with the people.

During this trip, King also visited Pope Paul VI at the Vatican.

This picture was taken at a press conference in London before King returned to the United States.
© History In Full Color
User Agreement
Cancel
Continue