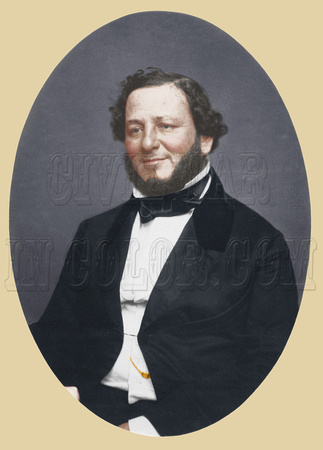 At the end of the War, Judah P. Benjamin was hunted by every Yankee wanting the big pay day of $40,000 the Federal Government was offering. Between his Jewish religion and having sent John Surratt (son of hanged Lincoln assassination conspirator Mary Surratt) on a covert mission to Canada, Benjamin believed he may not survive Federal capture.


Benjamin served as the first Jewish cabinet member in North America and the first Senator to acknowledge being Jewish in the US Senate. He has been referred to as "the brains of the Confederacy". Benjamin served as the Confederate Attorney General, Secretary of War & State. As Secretary of State, he arranged for the Erlanger "Cotton Loan" to buy military supplies, which were delivered by blockade runners. It is only appropriate that Benjamin's image appears on the Confederate two dollar bill.


Benjamin's harrowing escape sounds like an adventure tale. He parts from Confederate President Davis and Cabinet members in Abbeville, South Carolina on May 2nd. He begins his escape disguised as a Frenchman seeking to make a land purchase. He speaks broken English like a Frenchmen as he made his way to Sarasota Bay, Florida. Benjamin travels by open boat the 600 miles to the Bahamas surviving squalls. After that he boards a sloop carrying sponges. When the boat leaks, the sponges expand and the sloop explodes. He and the crew are fortunately rescued by a British warship. He then takes a steamer to England which catches on fire after five hours and has to return to port to have the fire extinguished. Two days later, Benjamin sets out again and finally reaches England on August 30, 1865.


A man who two US Presidents nominates (and he declines) to be a Supreme Court Justice, restarts his career by reading law for three years before building a very successful law career in London. This enables him to support several friends in the former Confederacy during the Reconstruction era with sizeable financial gifts. Per his doctor's advice, Benjamin retires in 1883 and moves to Paris, where his family lives. On May 6, 1884, Benjamin dies in Paris. His Catholic wife has the last rites administered to him and buries Benjamin in a Catholic cemetery. His grave did not bear his name until 1938, when a plaque was placed by the Paris chapter of the United Daughters of the Confederacy.
Restoration and colorization copyright 2014 by HistoryInFullColor.com
User Agreement
Cancel
Continue