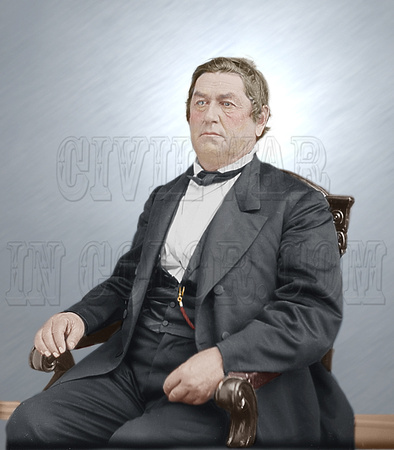 "What you are saying, Mr. President, is that we of the South have committed treason, that we have forfeited our rights, and that we are proper subjects for the hangman. Is that what your words imply?

"Yes", Lincoln said. "You have stated the proposition better than I did. That is about the size of it". Hunter and Lincoln during the Hampton Roads Peace Conference, 1865

In 1860, Robert M. T. Hunter's loyalties was being torn apart. The Senator from Virginia had spent close to thirty years in public service. Hunter had fought to keep the Union together. He believed that Lincoln's election alone wasn't cause for secession. As he returned to Congress after Lincoln's election, his son had to ask which side had his allegiance. When it came time to choose, Hunter's loyalty was to the Confederacy.

During the war, Hunter served as the first Confederate Secretary of State, in the Confederate Senate, was a commissioner at the Hampton Roads Peace Conference and is pictured on the Confederate $10 bill.
Restoration and colorization copyright 2014 by HistoryInFullColor.com
User Agreement
Cancel
Continue