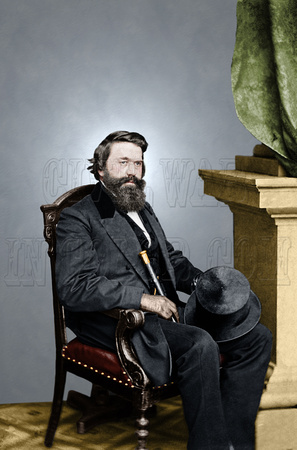 Born and raised in South Carolina Louis Wigfall lost both of his parents by the time he was 13. Raised by a guardian till he was 18 when he entered a series of schools in South Carolina and Virginia. During this time he entered his first, of many duels. He quickly became known for spending more time in the tavern than the classroom and by the time he graduated was heavily in debt from gambling. He took over his brother's law practice (who had died in a duel) but never felt that “mere office business” suited him.

During the 1840 election he got in several more duels and was charged (but not indicted) with murder. Later that year in Georgia, Wigfall took a bullet through both thighs during a duel with a future congressman. With his interest more in politics than law, he lost all of his clients and with medical bills from his infant son soon lost all of his property in South Carolina. A cousin, and former South Carolina governor now living in Texas arranged for him to open a new law practice in Texas.

With a reputation as a duelist and fighter he was quickly accepted into Texas politics and served in the Texas state house as both a state Congressman and Senator. In 1859 he was elected to the United States Senate to fill a vacancy. He remained in office till the outbreak of the war and used his position to spy on Union preparation in defenses of Washington.

After South Carolina's secession, Wigfall travelled to Charleston and volunteered as an aide to General Beauregard. On April 12th, 1861, General Beauregard ordered the battery to fire onto Fort Sumter. After two days of shelling, without loss of life on either side, no one was ready to stop.

Fate stepped in the form of Wigfall. The confederates had shot down the pole flying the Union flag, causing confusion. Wigfall, without consulting Beauregard, took it upon himself to row out to Fort Sumter to achieve the glory of arranging a surrender.

Wigfall, on arrival, began waving a white hanky on the end of his sword to indicate the Fort's surrender. Informed that only Anderson could signal the white flag, Wigfall went to Anderson to negotiate - "Terms of Evacuation". Anderson considered "Evacuation" more appealing then "Surrender". Terms were agreed on and Wigfall left.

Wigfall was rewarded with a commission as a Brigadier General for the “Texas Brigade”. Soon his fondness for drink became apparent and he was reported visibly drunk both on and off duty on numerous occasions.

Less than a year after the fall of Fort Sumter he resigned his commission and took a seat as a Confederate State Senator. Following the war he forged a parole to return back to Texas and then to London. He tried but was uable to turn England against the United States. When this failed he returned to the U.S. and died in 1874 in Galveston, Texas.
© History In Full Color
User Agreement
Cancel
Continue