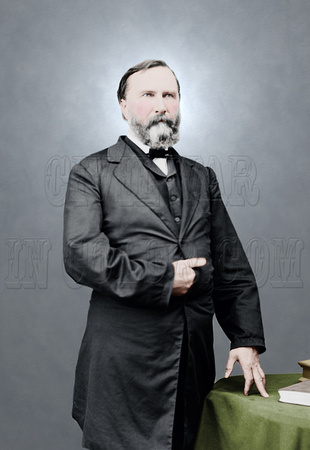 General Robert E. Lee referred to him as, "The staff in my right hand." As both North and South appreciated Confederate General Longstreet's skill on the battlefield, how did Longstreet's place in history as a scapegoat for the Confederacy begin?


The answer - during Longstreet's school days at West Point. Longstreet was a poor student but he was popular with his classmates, many of whom were well known during the Civil War. Ulysses S. Grant, along with many of his contemporaries, referred to Longstreet as "Pete", the nickname Longstreet's father had given him as a boy. The pair had met while attending West Point. Longstreet introduced Grant to his fourth cousin, Julia Dent and may have been his best man at their wedding.


Learning of Grant's appointment as General-in-Chief of the Union Armies, Longstreet said, "We must make up our minds to get into line of battle and to stay there; for that man will fight us every day and every hour till the end of the war. In order to whip him, we must outmaneuver him, and husband our strength as best we can."


Both Grant and Longstreet were present at the surrender signing at Appomattox. When they stopped inside the courthouse, Grant took Longstreet's hand and said, "Pete, let us have another game of brag*, to recall the days that were so pleasant." Longstreet recalled thinking, "Great God!" I thought to myself, "How my heart swells out to such magnanimous touch of humanity. Why do men fight who were born to be brothers?"


In November 1865, US Gen. Ulysses S. Grant petitioned President Andrew Johnson to restore Longstreet’s citizenship. When Longstreet and Johnson met, Johnson said, “There are three persons of the South who can never receive amnesty: Mr. Davis, General Lee, and yourself. You have given the Union cause too much trouble.”

Despite Johnson, Longstreet's citizenship was restored, by act of Congress - with help from Grant, on June 19, 1868. In the fall, Longstreet supported Grant for president and attended the inauguration in March. Grant appointed Longstreet to be the Surveyor of Customs for the Port of New Orleans. It was the first of Longstreet's appointed posts by successive US Presidents. Along with becoming a Republican after the war, his journey as a "villain" in the South had begun.

* Brag is a card game that is similar to poker, but older.
Restoration and colorization copyright 2014 by HistoryInFullColor.com
User Agreement
Cancel
Continue