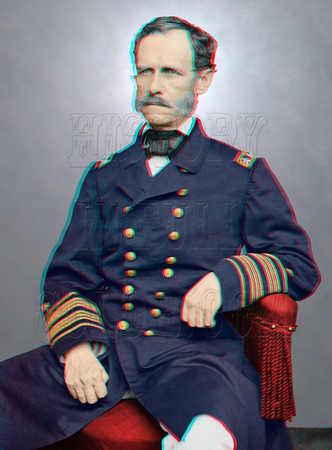 
John Dahlgren joined the Navy at the age of 17. He spent the next 43 years in the Navy, until his death in 1870. For his first 20 years of service he moved slowly up the ranks. By 1847, he was the ordnance officer at the Washington Navy Yard. Dahlgren was soon recognized for his work developing several weapons advancements, along with writing numerous books.

To aid weaponry development, Dahlgren established a foundry for the Navy. This allowed the Navy to engineer their own weapons. After an 1849 explosion killed one of the gunners, the Dahlgren Gun, for which he is best known, was developed. It was determined that by increasing the size of the rear of the gun, it would add additional strength. The guns' nickname became “soda bottles” due to their unique shape.

The Dahlgren Gun became a great success. It was adopted as the standard Naval cannon from the 1850’s to the 1870’s. Its goals of safety and accuracy were achieved. In an era, when due to poor metal quality such things were common, the Dahlgren shell gun never burst during service.
© History In Full Color
User Agreement
Cancel
Continue