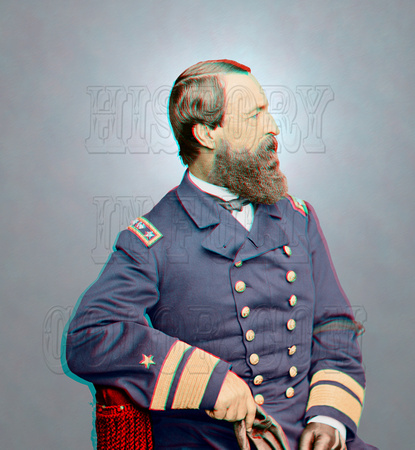 
David Dixon Porter was born into a Navy family. His father David Porter had been a Commodore in the U.S. Navy before resigning to become Commander-in-Chief of the Mexican Navy. His adopted brother David Farragut became the first four star admiral in the U.S. Navy, David Dixon Porter, became the second. He was also cousin to Fitz John Porter, a Major General in the Union Army.


David Dixon Porter’s Navy career did not start out in the United States, but in Mexico. His father had left the U.S. Navy to take charge of the Mexican Navy and took his nephew David Henry Porter and his sons David Dixon and Thomas with him. David Dixon was only 12 at the time and his brother was 10. Yellow fever soon struck the family and Thomas died soon after arrival in Mexico.


David Dixon was a midshipman aboard his cousin David Henry Porter’s ship. David Henry was Captain when he encountered 50 ships form the Spanish Navy and decided to attack. During the course of battle Captain Porter was killed and David Dixon was taken prisoner. Upon exchange, his father, having already lost one son and a nephew decided to return David Dixon to the United States.


At the age of 16 he became a midshipman in the U.S. Navy. With his combat experience, maturity and cocky attitude he had a difficult time in the early days. Another 12 years would pass before he was promoted to Lieutenant in 1841. With the start of the Mexican-American war his experience in the Mexican Navy became a valued asset. He was able to draw up a battle plan used against the Mexican Navy and in return was made Captain of one of the Navy ships.


Following the Mexican-American War he was Captain of the ship USS Supply which brought camels to the United States as an experiment by Secretary of War Jefferson Davis. By the start of the Civil War though, Porter was ready to leave the Navy and had received offers to take command of a civilian ship. These plans were put on hold with the succession of the Confederacy. Porter was promoted to Commander and served in the Vicksburg campaign. Soon after he was promoted to Rear Admiral.


His earlier brashness was still apparent and he developed a number of enemies that considered him arrogant, self-serving and without the leadership qualities desired. With his adopted brother as head of the Navy and with friends such as General Grant Porter was able to continue and contributed to several victories in the west.


Following the war there was concern that he might provoke war with Great Britain and it was decided to make him superintendent of the Naval Academy. Porter, to his credit, modernized the Academy and followed the example of West Point. These changes made a significant impact on the direction of the Navy. He was promoted to Vice Admiral in 1866 and his adopted brother David Farragut to Admiral.


With the election of Grant in 1868, Porter had a friend in the White House and the Secretary of the Navy deferred almost all of the operations to Porter. With the death of his adopted brother in 1871, Porter was the obvious choice to fill the position. The enemies that he had made through the years attempted to stop him. While eventually promoted to the position, he was stripped of most of his power and influence. For the next twenty years, while officially the senior officer in the Navy, he was in fact a figurehead with little active participation. He suffered a heart attack in 1890 and his health declined rapidly over the next several months. He passed away at the age of 77 in February of 1891.
© History In Full Color
User Agreement
Cancel
Continue