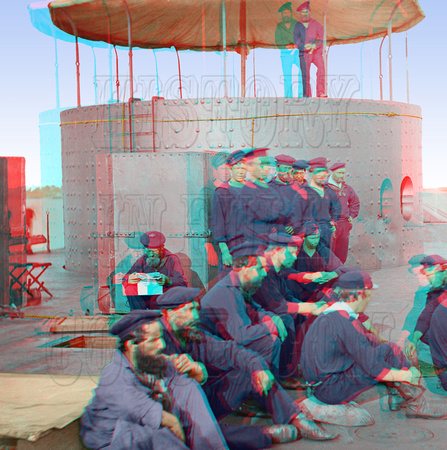 
Few people today, realize that the iconic Monitor we think of only served for eleven months before it was lost at sea during a storm. Such was the success of the ship that it inspired a whole line of Monitor class warships, both in the U.S. and around the world. The legacy of this class of ship continued in service as late as the Vietnam War.


During the Civil War, the Union Navy produced dozens of Monitor class ships. Some of these ships had two or three turrets to increase the fire power over the Monitor’s single turret. Attempts were made to improve the ocean maneuverability that proved to be the Achilles’s heel of the original. These ships were excellent river boats; with shallow drafts and large caliber weapons, they could bring devastating fire on enemy shore positions along the river. The last of the Civil War era Monitors were retired shortly before the First World War. By that time, future generations of ships inspired by the Monitor had replaced them.


Later Monitors became gun boats with large weapons and limited armor to allow it to travel into shallow river areas. Immediately following the war other countries recognized the power of these vessels and began to build their own ships inspired by the Monitor. Sweden produced its first Monitor in 1865 and ultimately produced 14. The first of these ships was named in honor of John Ericsson, who invented the Monitor and had been a Swedish native. Other navies, including Britain’s Royal Navy produced their own. The U.S. continued to build variations up to the Vietnam War that carried the abbreviation of MON (for Monitor). These served as part of the brown water Navy operating river boats during that war.


All of the U.S. Civil War era Monitor class ships were either lost or ultimately scrapped. None exists today. The oldest remaining Monitor inspired ship is Sweden’s HMS Sölve. She was built in 1875 by John Ericsson, the original Monitor inventor. Today it is part of a maritime museum in Gothenburg, Sweden.
© History In Full Color
User Agreement
Cancel
Continue