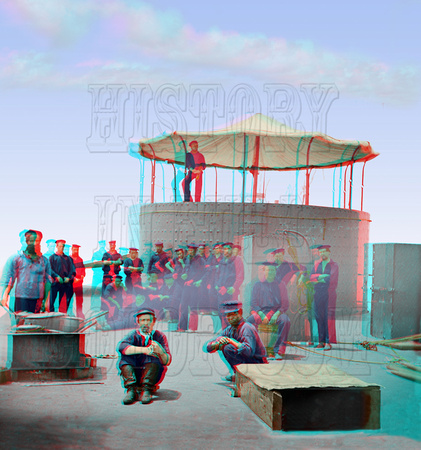 
On July 9th, 1862 the crew of the USS MONITOR was enjoying a break. The battle of the ironclads had taken place a few months earlier on March 9th. Here you see the crew relaxing on deck while a meal is prepared. Since the interior of the Monitor had little visibility or fresh air, this must have been a welcome relief during the heat of summer. Little did the men realize that the ship would only survive for another six months.

Almost exactly eleven months after the Monitor was launched in January of 1862, it sunk off of Cape Hatteras, NC on New Year's Eve, 1862. Sixteen of the sixty two crew were lost; perhaps some of these were among them. For a ship that lasted less than a year, it had a major impact on the design and use of Naval ships up to the current day.
© History In Full Color
User Agreement
Cancel
Continue