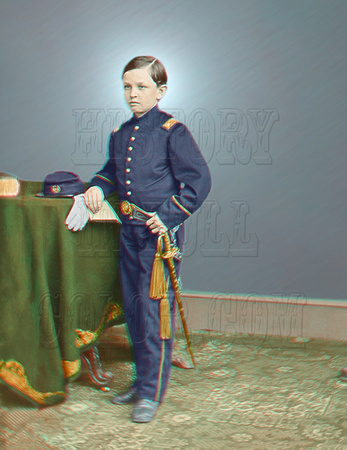 
Born in April of 1853, “Tad” Lincoln had just turned eight the week before the war started. Tad’s given name was Thomas, in honor of Abraham Lincoln’s father, who had died two years before he was born. Nicknamed "Tad" due to his tendency to wriggle and his large head in comparison to his body, the nickname stuck the rest of his life.


With little discipline in the White House, Tad was free to do as he pleased. What pleased him were practical jokes. He would interrupt cabinet meetings, spray guests with a fire hose, lock servants and visitors in or out of rooms and in all manner, enjoy his time as the President’s son. Lincoln seemed to be more amused than most with Tad’s jokes and often laughed rather than provide discipline.


Like his parents, Tad enjoyed the theatre and appeared in two productions with Lincoln in attendance. On the night of Lincoln’s assassination, he was attending “Aladdin or The Wonderful Lamp” at the Grover’s Theatre while his parent’s were at the Ford’s Theatre. When news was heard of the shooting, Tad was returned to the White House, where he learned the news from a staff member.


Following the assassination he and Mary moved to Chicago. It quickly became apparent that despite being tutored in the White House, he was almost completely illiterate. Within two years he was the editor of the student paper of the Chicago school he attended. The following year Mary Lincoln decided to move to Europe and settled in Frankfurt, Germany. With the outbreak of the Franco-Prussian war in 1870, they moved to England until they returned to the U.S. in 1871. During the trip Tad became ill on the ship. His condition continued to deteriorate and within a month he died at the age of 18, most likely of tuberculosis.
© History In Full Color
User Agreement
Cancel
Continue