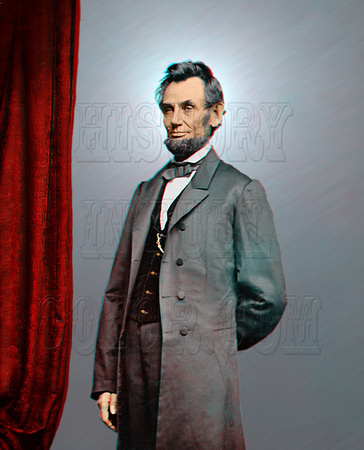 
Today, the story of Lincoln being born in a log cabin, while true, conveys a humble upbringing in a poor, struggling family. However, at the time of his birth, Lincoln’s father, Thomas, was one of the richest men in the county. He owned 600 acres, numerous livestock and horses as well as several lots in town. This changed in 1816 when Lincoln was seven. Due to faulty titles on the land, his family lost everything. They went from the top of the financial hierarchy in the county to the bottom.


Without prospects in Kentucky, the family moved to Indiana. This too proved to be difficult. When Lincoln was nine, his mother died of milk sickness (caused by consuming toxic dairy products). His father remarried the following year. It was his stepmother, Sarah, who encouraged his desire to read and learn. At six foot four inches, Lincoln almost touched the ceiling in the small farmhouse. Sarah joked that he was so tall that he would leave footprints on the ceiling. One day while she was away he had some of the local school boys dip their feet in mud and held them upside down so they could make footprints on the ceiling. As Lincoln put it, "took a broom to my head, but I could tell she was very amused by it." When Lincoln was 21, another outbreak of milk sickness affected their homestead in Indiana and the family moved again, this time to Illinois.


Lincoln left his father’s home the following year and began work in New Salem, Illinois. During this time he took a load of goods for sale down local waterways to the Mississippi and on to New Orleans. Once there, he sold the goods and walked all the way back to New Salem. Perhaps because of this trip he later (at age 40) received a patent (the only one for a president) for an invention that would allow stranded boats to lift themselves off of a reef or shoal and back to deeper water.


Lincoln had probably no more than 18 months of formal education. When he was 23, Lincoln decided to run for office. While able to draw crowds, he was unable to support the campaign financially and lost. That same year he joined the militia and served as a Captain during the Black Hawk War. Two years later he won a seat in the state legislature and two years after that passed the bar in Illinois. When asked how he studied for the bar he replied: "I studied with nobody".


He became engaged to Mary Todd in 1840 with the wedding set for New Year’s Day, 1841. As the date approached the couple separated and was finally married in November 1842. While preparing for marriage a second time, he was asked where he was going, "To hell, I suppose." Once married the Lincoln’s enjoyed their family and raised four boys. Sadly, only one would live beyond age 18.


For sixteen years, Lincoln honed his analytical skills as he travelled Illinois as a prairie lawyer representing clients around the state. In 1857, Lincoln took a case that propelled him onto the national stage. Lincoln represented a railroad that had built a bridge over the Mississippi. A steamboat had collided with the bridge. A suit was filed stating that the bridge was a hazard to river navigation and that a tunnel or suspension bridge should replace it. Lincoln argued that a tunnel was too expensive and that regardless of height, a steamship would be built that exceeded that height. In his conclusion he reminded the jurors that a person has as much right to sail up and down a river as to cross it. In a display of showmanship, he concluded that no less than the fate of western civilization was at stake!

While that trial ended in a hung jury, the argument continued for many years eventually reaching the Supreme Court twice during and after the war. Ultimately the Court agreed with Lincoln and while upgraded and replaced over the years, the bridge remains in use today as a highway bridge for automotive traffic.


It was not until a few years later that Lincoln grew the beard we remember him for today. He cultivated it a month before the election of 1860 at the suggestion of eleven year old Grace Bedell. She thought he would be more electable with a beard because "your face is so thin". In his response he wrote: “…As to the whiskers, having never worn any, do you not think people would call it a piece of silly affection if I were to begin it now?” Soon after, the bearded Lincoln would enter the White House and take his place in history.
© History In Full Color
User Agreement
Cancel
Continue