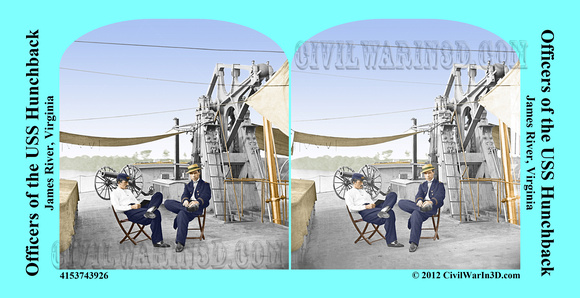 Two officers enjoy a few minutes of relaxation next to the “walking beam”. This was an early type of steam engine used on paddlewheel boats. It got the name “walking beam” because the large diamond shape structure at the top would rock back and forth (sort of like a teeter totter). Since each oscillation pushed the paddle wheel forward, it was felt that the beam was “walking” down river.

This type of engine was popular in the early days of steam power because it was easy to manufacture and most of the structure was above the deck, which meant it could be used on shallow rivers. By the latter half of the 19th century, more effective types of engines had replaced the walking beam. Customers, however, still preferred to see the engine in motion. Since it was cheaper to build, this engine continued to be used long after it was outdated. Examples of this type of engine appear as late as the 1940’s.
Oddly enough, the “walking beam” was an engine type that was only popular in the United States. It was used primarily on rivers and intercostal waterways. It was not suited for the open ocean since the beam made it top heavy. Paddlewheel boats operate better on smooth rivers and lakes and not the high seas.

Its use as a Navy vessel was also somewhat precarious. The primary target for enemy fire was the engine exposed above deck. Damage to this one component could effectively destroy the entire ship since it could no longer operate. For this reason, most of the paddlewheel boats used during the Civil War were purchased and converted to Navy use - not built for the Navy. The Hunchback herself was a commercial ferry both before and after the war.
© History In Full Color
User Agreement
Cancel
Continue