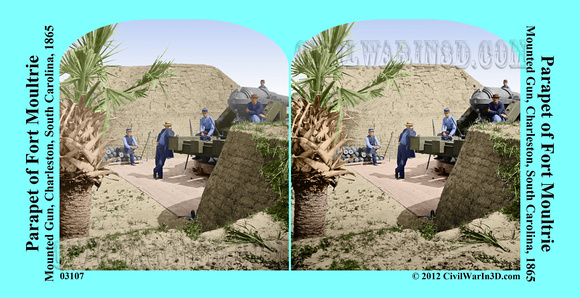 Fort Moultrie was established during the Revolutionary War to defend Charleston from attack by the British. During 1809, a third Fort Moultrie was constructed with brick fortifications and had more advanced weapons. As part of the defense of Charleston, a Federal garrison was stationed at the Fort before the start of the Civil War.

In December 1861, South Carolina seceded from the Union. Six days later, Major Robert Anderson moved the Federal troops from Fort Moultrie, to the almost completed Fort Sumter. Anderson left the established fort and moved to the unfinished fortification due to its location. Fort Moultrie faces the ocean and could easily defend from attacks from the sea. However, it lacked defense from attacks from land. Anderson knew that its walls could easily be breached in the event of a Confederate attack. More importantly, whoever controlled Fort Sumter, located at the mouth of the Charleston harbor, controlled access to the South's most important seaport - Charleston.

Following the war, Fort Moultrie was again repaired and modernized. The fort continued in service until 1947, when it was decommissioned. It remained in the defense department until 1960, when it was turned over to the National Park service. Today, the fort has exhibits and displays ranging from the Revolutionary war to World War II.
© History In Full Color
User Agreement
Cancel
Continue