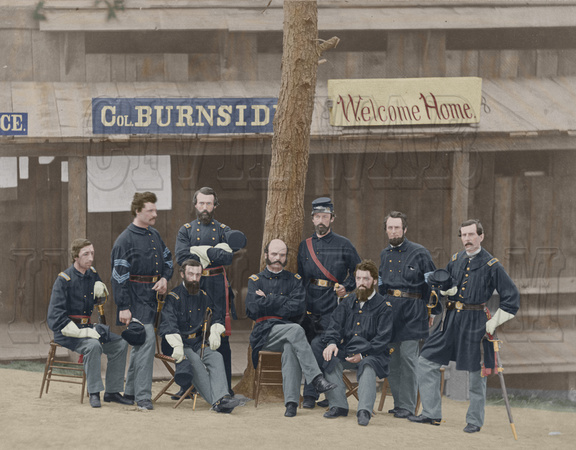 “You entirely mistake the character of the Northern people. … Not only will the North fight, but she will also triumph. The experiment of secession will fail, and the South, in ruin and desolation, will bitterly repent the day when she attempted to overthrow a wise and beneficent government." – Ambrose Burnside

On April 15, 1861, the same day President Lincoln called for 75,000 volunteers to serve for three months, the youngest governor in the Union, 30-year-old William Sprague telegraphed Burnside in New York City. "A regiment of Rhode Island troops will go to Washington this week. How soon can you come on and take command?" Burnside replied, "At once."

In 1861, Ambrose Burnside was successfully employed with the Illinois Railroad. Having recently recovered financially from a failed business venture, West Point graduate Burnside could have avoided returning to the Army. Instead, Burnside traveled to Providence, R.I. to organize the regiment. By Thursday, April 18th, a light battery of six rifled guns, horses and 150 men boarded a steamer for Washington via New York. On Saturday, 544 men followed. At noon, on April 26th, the men entered the Capital.

The remainder of the unit arrived the following week. Twelve hundred Rhode Islanders had heeded the call to defend the Capital. The company was comprised of a cross-section of society including some of the wealthiest men in Rhode Island. It was nicknamed the "million dollar regiment." Lincoln’s secretary John Hay wrote that “there was enough of breeding and honor to retone the society of the Gulf and wealth enough to purchase the entire state of Florida.”

When Burnside was instructed to requisition supplies for his men, he replied loftily, "We need nothing, Sir, from the government; Rhode Island and her governor will attend to their wants." Sprague had donated 96 horses to accompany the artillery battalion and loaned $100,000 to outfit the volunteers.

Soon, the regiment had settled in Camp Sprague, two miles out from the center of the city on a farm. Now the location is the intersection of Florida Ave, New York Avenue, and 1st street. It is speculated that the signs, “Col Burnside” and “Welcome Home” refers to Burnside’s recent return to the Army after resigning his commission in 1853.

Camp Sprague became known for its “comfort, the cleanliness, the fine bearing, the excellent discipline of the Rhode Island troops were themes for commendation upon every tongue. Their dress parade at sunset was one of the acknowledged ‘sights’ of Washington. Hundreds of spectators, among whom were not infrequently President Lincoln, the members of the Cabinet, and the most distinguished men of the country, daily assembled to witness the parade and to participate in the religious services that usually concluded it.”
© History In Full Color
User Agreement
Cancel
Continue