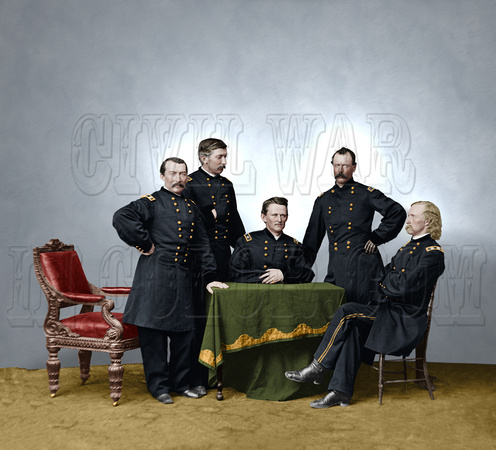 In September of 1864, despite U.S. GEN Sherman's capture of Atlanta, Georgia, the re-election of Lincoln in November was in doubt. The breadbasket of the Confederacy, the Shenandoah Valley, Virginia was still in control of the Confederates. U.S. GEN Sheridan and his staff of aggressive generals were determine to gain control of the Shenandoah for the Union.

The October 9, 1864, Battle of Tom's Brook is considered to be the most decisive Union cavalry victory in the Eastern Theater. The two opposing generals, U.S. GEN Custer and C.S. GEN Rosser were close friends and roommates at West Point. Custer would call Rosser by his nickname "Tex" and "Tex" would call Custer "Fanny".

Rosser noticing Custer's arrival at the battlefield reportedly shouted, "You see that officer down there? That's General Custer the Yanks are so proud of, and I intend to give him the best whipping today that he ever got."

Custer spotting Rosser, rode out in front of his lines and made a sweeping grandiose bow in Rosser's direction.

Rosser's forces were protected by the high bank of Tom's Creek. Custer sent three of his regiments around Rosser's flank causing the Confederates to retreat. In what became known as the "Woodstock Races", the Union troops chased the Confederates for over ten miles into they reached the protection of C.S. GEN Early's infantry.

You may have made me take a few steps back today, but I will be even with you tomorrow.

Please accept my good wishes and this little gift—a pair of your draws captured at Trevillian Station.

Custer shipped Rosser's gold-laced Confederate grey coat to his wife with a reply.

Thanks for setting me up in so many new things, but would you please direct your tailor to make the coat tails of your next uniform a trifle shorter.