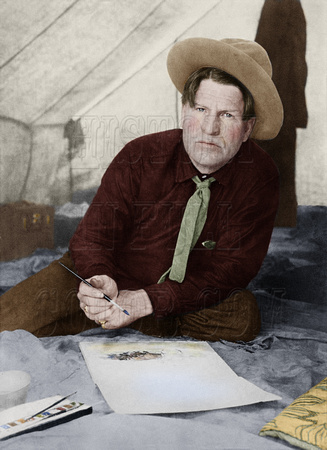 "The West is dead... you may lose a sweetheart but you won't forget her." Charles Russell

Iconic Western artist Charles Marion Russell grew up in St. Louis, Mo. dreaming of becoming a cowboy. In March of 1880, 16-year-old Russell “light out for the Territory ahead” to experience the frontier in Montana. Russell soon discovered herding was not for him. “I’d lose the damn things as fast as they put’em on the ranch”, he wrote.

Renowned internationally for his paintings, sculptures and books depicting rivers before dams, the frontier before ranches and well known events from the Indian point of view, Russell also created “pocket art”. Instead of jangling coins while standing around talking, using modeling clay, Russell would be busy creating a sculpture in his pocket. When completed, Russell would pull out a mouse, dog, or other animal and gift it to whomever was interested.

Growing up, Russell would draw and make animals out of clay. His artistic career was launched during the harsh winter of 1886 – 1887, later known as the “Great Die Up”. Russell drew “Waiting for a Chinook”, a picture of a starving cow losing a standoff with two coyotes. The biggest cattleman in the country, Louie Kaufman, in a letter asked ranch owner Jesse Phelps how the cattle was surviving the winter.

Russell recalls, “…. Jesse says to me, ‘I must write a letter to Louie and tell him how tough it is.’ I was sitting at the table with him and I said, ‘I’ll make a sketch to go with it.’ So I made one, a small water color about the size of a postal card, and I said to Jesse, ‘Put that in your letter.’ He looked at it and said, ‘Hell, he don’t need a letter, this will be enough.”

The image was reproduced in several Montana newspapers; turning the cowpoke into a working artist.
© History In Full Color
User Agreement
Cancel
Continue