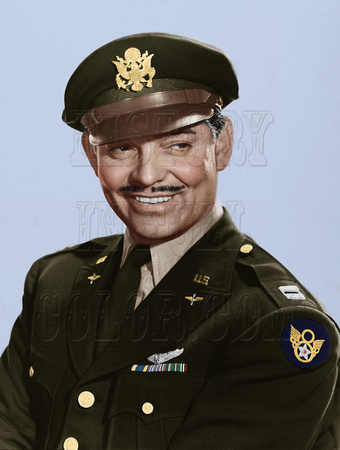 Clark Gable's aircraft was attacked by fighters, damaged by flak, flak went through his boot and narrowly missed his head while one crewman died and two others were wounded. Gable wasn't just another movie star in costume. He served on very real missions during World War II.


Devastated by the death of his wife, Carole Lombard, in a plane crash returning from a War Bond Tour, Gable joined the US Army Air Force. Instead of staying in Hollywood to serve in the film department, Gable insisted on signing up as an aerial gunner on a bomber and going overseas. MGM arranged for his friend and cinematographer, Andrew McIntyre to join up with him. Assigned to the 351st Bombardment Group, together, they would film "Combat America", a propaganda film about air gunners.


“Gable was assigned to our squadron but not to a particular crew,” said Tech. Sgt. Ralph Cowley. “The group controlled his assignments. They wanted him to have an outer-wing aircraft with a clear view of the skies for his air-to-air photography. He stayed with us right up from 1942 to 1945 and I can tell you, they didn’t put him on the milk runs. He took a lot of pictures of flak bursting beside his aircraft.”


For Gable, fame was an unique liability. Adolph Hitler offered a sizeable reward to anyone who could capture and bring Gable to him unscathed.

"How can I hide with this face?" he exclaimed to a friend. "If I ever fall into Hitler's hands the son of a bitch will put me in a cage like a big gorilla. He'd exhibit me all over Germany. If the plane goes down," he concluded, "I'll just go with the son of a bitch."

Despite the reward, Gable made it back home in one piece. "Combat America" was released at the same time as "Memphis Belle", which totally overshadowed the film. To MGM's relief, Gable was ready, fit and able to return to his pre-war job of Movie Star.
© History In Full Color
User Agreement
Cancel
Continue