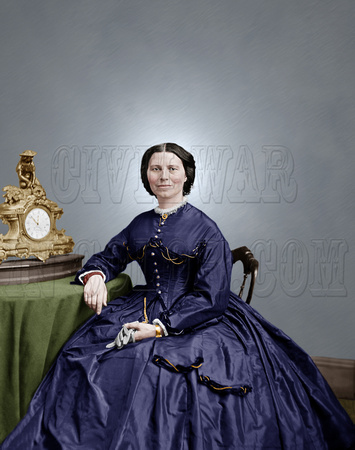 It was not "a light thing ...to pick up a shattered arm to bind & sling it & find the other suddenly thrown across your neck in recognition. Oh what a place, to meet an old-time friend." Clara Barton

Clara Barton's foresight, courage, and perseverance brought the Red Cross to the United States after the Civil War. During the War, women from both the North and South sacrificed to care for the wounded.

The difference between Clara Barton and the others - publicity. In an era when women traveled with an escort, rarely worked outside of the home and had to fight for higher education, Clara Barton spent almost two years on the national lecture circuit telling her story. She was able to command fees equal to male lecturers and successfully competed for packed, enthusiastic audiences with such revered speakers as Fredrick Douglas and Mark Twain. Through her lectures, Barton became a household word, synonymous with humanitarian sacrifice along with earning her financial independence.


A chance meeting at a railway station in Ohio with Elizabeth Cady Stanton and Susan B. Anthony, the two celebrated feminists, resulted in Barton's involvement in feminist issues. However, it was her meeting in Switzerland with representatives from the International Convention of Geneva, more commonly called the Red Cross that changed the course of American philanthropy.


Barton was asked why the United States had three times declined to acceded to the articles of the Geneva Convention. Having never heard of the organization, Barton replied that she was, "sure the American people did not know anything about it or ever heard of it". The little committee thanked her cordially, left an armload of Red Cross literature, and said that they hoped she would give the matter her consideration and support.


In 1870, France declared war on Prussia. Barton saw the Red Cross in action and was impressed. She decided her next project would be bringing the Red Cross to America - a task easier said than done. Barton had to change the prevailing political position that the Treaty of Geneva conflicted with the Monroe Doctrine, which prohibited international intervention in American affairs.

She emphasized in her appeal to the general public, that in addition to war time responsibilities, "it may be further made a part of the raison d'être of those national relief societies to afford ready succor and assistance to suffers in time of national or widespread calamities, such as plagues, choler, yellow fever and the like, devastating fires or floods, railway disasters, mining catastrophes, etc.


Clara Barton mostly worked alone. She lobbied against bureaucracy to achieve what diplomats were unable to do. On March 16, 1882, Congress ratified the Treaty of Geneva.