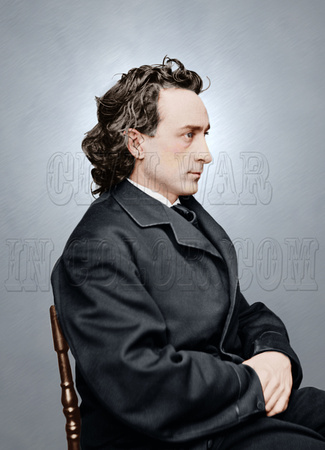 Today, when you think of the name Booth, it is John Wilkes that comes to mind, not Edwin. This was not always the case. Edwin Booth was five years older than John Wilkes and had been appearing on stage since 1849 (John Wilkes did not become appear on stage till 1855). As an actor, he had no equal in his day. Some still consider him the greatest American stage actor and note him in particular for his portrayal of Hamlet. He held the record for an actor performing that role, which was referred to as “the hundred nights Hamlet”, until it was broken 58 years later by John Barrymore.

Edwin and John Wilkes were the illegitimate sons of another famous actor, Junius Brutus Booth. Both were ashamed of being illegitimate, ambitious and rivals for achievement. Edwin appeared onstage with John Wilkes (and their brother Junius Brutus, Jr.) only once. In 1864, the three brothers appeared in “Julius Caesar”, to help raise money for a statue of Shakespeare that stands in Central Park.

Unlike his brother, Edwin supported the Union and even voted for Lincoln in 1864. Later that year, or early in 1865, he saved Robert (son of Abraham) Lincoln’s life. Robert was at a crowded train station, pressed against a train, when it began to move. Lincoln dropped into an open space, helpless to save himself, when he was grabbed by the collar by Booth. Lincoln immediately recognized Booth. He expressed his gratitude to him but it was not until months later that Edwin found out the identity of the person he had saved.

When Edwin returned to acting, he resumed his place in the American theatre, owned a theatre for a time and performed another worldwide tour. In 1888, he established the Player’s Club in New York as a social group for actors. He lived upstairs with the club on the first two floors. The bedroom, in which he died in 1893, has remained untouched to this day.
© History In Full Color
User Agreement
Cancel
Continue