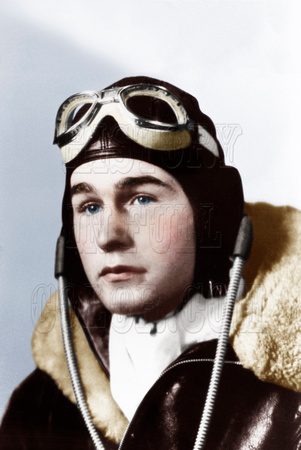 “I feel a responsibility still for the lives of the two people that were killed.” - George H.W. Bush

Before he was the 41st President, George Walker Bush was a U.S. Navy Aviator. Bush enlisted in the Navy and graduated from Phillips Academy Andover on the day he turned 18 years old. Less than a year later, he became the Navy’s youngest pilots.

For the next two years, Bush flew torpedo bombers off the USS San Jacinto during World War II. On Sept. 2, 1944, his mission was to attack a radio station on the island of Chichi Jima, 700 miles off the coast of Japan.

“The minute we started angry black puffs of anti-aircraft fire … And they were all over the place. And then I felt that we were hit and … I tried to stay on my target, release the bombs, and pull out here so I just – I have the satisfaction of knowing I completed my mission.”

Bush’s plane, a TBM Avenger, was burning. “I thought the planes was going to explode because I could see fire along where the wings fold.” Bush ejected from his aircraft, parachuted into the ocean and waited on an inflatable raft for four hours.

The USS Finback, a lifeguard submarine, was able to pick him up. Bush’s two crewmen, Ted White and John Delaney didn’t make it out of the plane. Bush would later say that he thought of his two crewmen every day.
© History In Full Color
User Agreement
Cancel
Continue