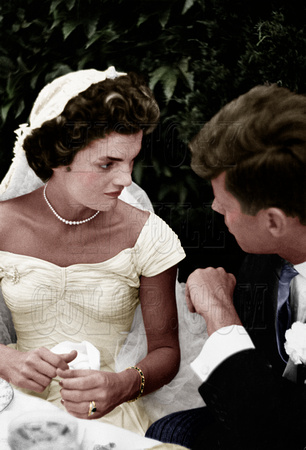 The September 12, 1953 wedding of Jacqueline Bouvier and John F. Kennedy was a media event seen in newsreels and photos across the country.

The bride borrowed her maternal grandmother’s veil of rose point lace. Her mother, Janet Auchinclosses, insisted on having the ivory silk taffeta gown made in New York City, N.Y. The two-carat diamond-and-emerald engagement ring from Van Clef & Arpels sparkled on Jacqueline’s finger. Kennedy’s gift of a gold-and-diamond bracelet can be seen on her wrist.

Grooming his son to be the President of the United States, Joseph “Joe” Kennedy, wanted the wedding to be as impressive as the wedding he recently gave his daughter Eunice, at St. Patrick’ Cathedral, N.Y. Auchinclosses wanted her daughter’s wedding to be more sedate.

Special traffic arrangements had to be made as crowds surrounded St. Mary’s Church, Newport, R. I., hoping to catch sight of the 800 guests, including movie star Marion Davies and other notables. Archbishop Cushing of Boston conducted the ceremony with a special blessing from Pope Pius XII before the nuptial mass.

The reception was held at Auchinclosses’s Hammersmith Farm. The 1,300 guests enjoyed, “one of those ‘perfect weddings’ – a sunny windswept day, horses and cattle grazing the pasture, everybody radiant and fit, several huge tents set up across the back lawns.”
© History In Full Color
User Agreement
Cancel
Continue