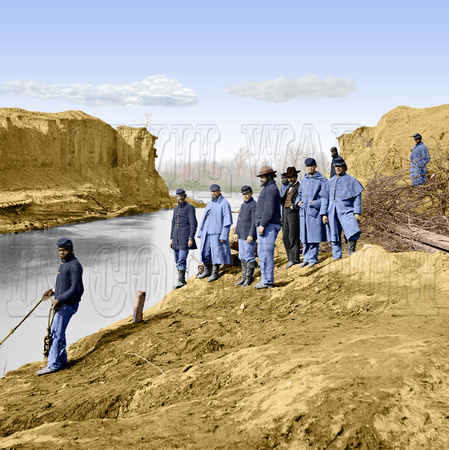 To bypass confederate batteries on the James river, Union General Butler had the United States Color Troops build a canal at Dutch Gap in what can only be described as an active war zone.

Alexander Gardner, a photographer who had been in Matthew Brady's employ, describes the achievement that the canal represented and the difficult conditions under which it was built:

"...The work of excavation commenced on the 9th of August, 1864. The rebels opened their formidable batteries on the laborers, on the 13th, and with few intervals maintained a fire from mortars and rifled guns until the conclusion of the enterprise. The regiments employed on the work were the 116th and 169th New York volunteers, and the 4th, 6th, 10th, 36th, 38th, and 100th United States colored regiments....The labors of these troops averaged one hundred and twenty men for a period of ten hours each day, working eighteen days in August, twenty-five days in September, and twenty-six in October. From the first of November until the time of completion, the average consisted of one hundred and thirty men, working eleven and a half hours each day...."

The USCT not only protected the workers from the confederates, as fatigue duty they hand dug 15,000 cubic feet of soil before a steam dredge could be brought into the site. The canal was between five and six hundred feet in length, its greatest width about one hundred and twenty-two feet, and its greatest depth about seventy feet.

Regrettably, the canal was not completed in time to be used by Union warships. Consequently, the sacrifices made by the USCT to construct the canal has been overlooked by history.
© History In Full Color
User Agreement
Cancel
Continue